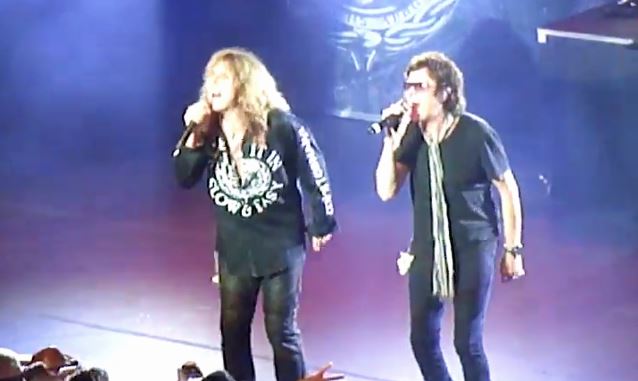 Glenn Hughes (DEEP PURPLE, BLACK SABBATH) joined his former DEEP PURPLE bandmate David Coverdale and the rest of WHITESNAKE on stage last night (Tuesday, June 9) at the Saban Theatre in Beverly Hills, California to perform the DEEP PURPLE classic "Lay Down, Stay Down". Fan-filmed video footage of his appearance can be seen below. Check out photos of the concert at California Rock News.

Coverdale is celebrating his past in the present with last month's release of WHITESNAKE's 12th studio album, "The Purple Album". The new set is billed as "a re-imagination of classic songs from David Coverdale's time as the lead singer for DEEP PURPLE's Mark III and Mark IV studio albums." PURPLE classics revamped for the new set include "Stormbringer", "Lady Double Dealer", "Soldier Of Fortune" and "Sail Away". Coverdale was DEEP PURPLE's frontman from late 1973 to early 1976 and sang on the albums "Burn", "Stormbringer" and "Come Taste The Band".

Coverdale explained that shortly before DEEP PURPLE co-founder Jon Lord's 2012 death, he was eyeing a DEEP PURPLE gig featuring all the band members throughout the lineups. The Pulse Of Radio asked Coverdale what if any relationship he has with the frontman he replaced — the great Ian Gillan. "Ian was one of the nicest blokes I met," he said. "I'd flown over to [England to] do a charity show for Roger Glover at the [Royal] Albert Hall — a thing called 'Butterfly Ball' [in 1975] — and Ian was there and we ended up carousing for, like, four days and nights. I ended up sleeping from the moment the plane took off from Heathrow back to Los Angeles. Woke up as we landed. The perfect journey! [Laughs] But, yeah, I have absolutely no problem sharing a microphone with Ian. None. Y'know? To me, it would be the ultimate expression of gratitude to breathtaking loyalty from PURPLE fans. It's amazing. It truly is."