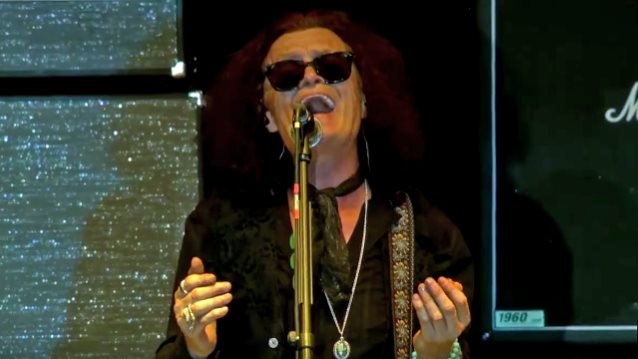 Speaking on the "White Line Fever"podcast, Hughes discussed his current tour featuring DEEP PURPLE songs, which will include the Steelhouse Festival in Wales on July 29 and 29.

"I'm saying this out of respect but DEEP PURPLE are on a tour called 'The Final Goodbye' or whatever it's called [Editor's note: It's actually called 'The Long Goodbye']," said Hughes. "It would appear the band are stopping touring. That's what I've been told from inside the office.

"All I can say to you is I'm doing the respectful thing by playing these songs. I may be the last man standing to do this, who can actually carry this off, and I'm going to embrace it and give it some love and bring it back to the fans.

"I just figured it was time to carry the torch, if you will, and play the songs I recorded and wrote whilst I was in the band — three albums and two live albums — and play a couple of the songs they did with David [Coverdale] in Mk III and a couple of Mk II hits which I will carry in the same arrangement that I did back in the seventies. And I think it will be an incredible thing for me to embrace the songs and for the songs to be very believable from somebody's who's spiritually inclined to do that."

Hughes said his motivations surrounded the honouring of fallen bandmates. "You know why I'm doing it? I lost two members in Jon Lord and Tommy Bolin," he explained. "I'm basically gracefully saying goodbye to those guys. I'm also saying goodbye… I'm going to be doing some touring behind this and it's very therapeutic for me, it's very cathartic to do this and to do it with love because, you know, I almost didn't make it.

"At the end of the seventies, I was almost a statistic so I stepped out of the fast lane and got well. All these years later, I'm spiritually in a good place and I'm trying to bring the love back to the fans and the followers. There's two generations of DEEP PURPLE, the fans that are my age and their children."

Hughes recounted the story of an attempt by him, Coverdale and Lord to reunite with guitarist Ritchie Blackmore.

"Jon Lord, David Coverdale and I had a meeting about seven or eight years ago, before Jon got sick, about reforming with Ritchie but Ritchie wouldn't take our phone call so after about six months of trying to get hold of him, we said, 'You know, we tried. Let's move on.' We did and then Jon got sick and passed away, I did a memorial show for him in London, at the Albert Hall."

Hughes was inducted into the Rock And Roll Hall Of Fame in 2016 along with fellow DEEP PURPLE members Blackmore, Coverdale, Lord, Rod Evans, Ian Gillan, Roger Glover and Ian Paice.