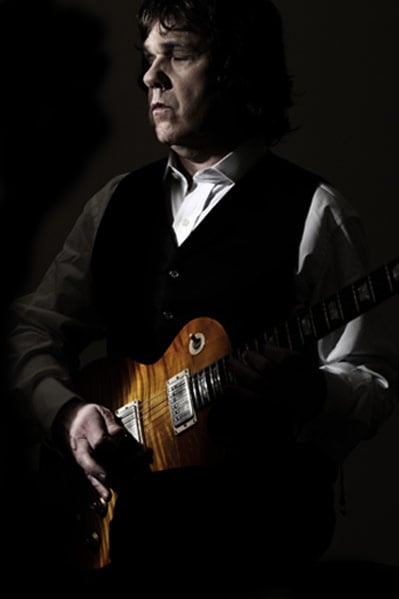 "Gary and I became very good friends in 1980," Glenn replied. "He left a THIN LIZZY tour midway through. He just disappeared — but he actually disappeared to my house. He couldn't take playing in a band anymore, and he had this tendency to just jump ship. I remember Phil Lynott calling my house and saying, 'If you've got him over there, I'm gonna slit your throat.' The idea of someone slitting my throat didn't make me happy.

"Gary and I formed this little combo called G FORCE. As soon as it started, I was out of it because I was too drunk. But we were still great friends in the early '80s, and I joined him to do an album called 'Run For Cover'. But I was drunk again, and it wasn't the appropriate time to work with Gary because he was against all druggy behavior at the time.

"I want to point out to your readers that Gary Moore was the most ferocious, innovative guitar player ever. His melodies were off the charts. He was a great friend, and we made our pact toward the end of his life, becoming friends again. My mom was listening to a piece of music on the radio last week. When the radio announcer said who it was, she said, 'Yes, it was Gary Moore. He was fantastic.' My mom is 84, she loves his playing."

According to The Telegraph, Gary Moore suffered a heart attack brought on by a massive amount of alcohol he consumed prior to being found dead in bed at a luxury Costa del Sol hotel in February 2011.

Moore had 380 mg of alcohol per deciliter of blood in his system, enough to put himself nearly five times over the the legal limit for drunk driving, tests have shown. That amount was just short of the 416 mg pop singer Amy Winehouse had in her body when she died surrounded by three empty vodka bottles.