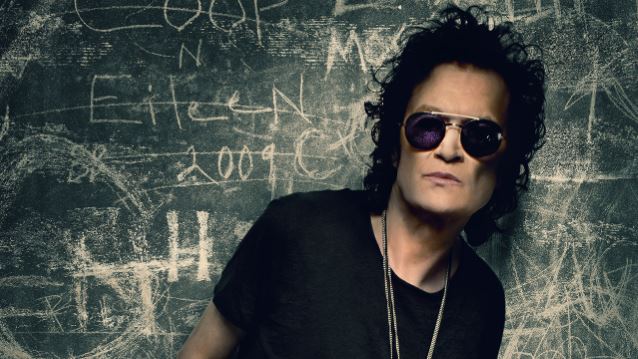 British-born vocalist and bassist Glenn Hughes, who is probably best known for his work in the early seventies during the heyday of DEEP PURPLE, has weighed in on underdog Donald Trump's stunning upset of Hillary Clinton in the U.S. presidential election, saying that the real estate mogul "needs to gather around him people that are smarter than him" to help him run the country and deal with the outside world.

Speaking to Rock Meeting, Glenn said about the U.S. election outcome (hear audio below): "It's divided my mother- and father-in-law — Vietnam decorated war veterans, and they are Republicans — and my wife, who is a very, very, very big supporter of Hillary, and she knows Hillary. So it's difficult for me, because I live in a divided house. It's difficult to talk politics at the dinner table."

He continued: "I just think the leader of the free world, Donald Trump, has to be very, very, very careful, because I don't think he's that smart. But he needs to gather around him a [group] of people that are smarter than him and people that know about world matters: economy, global warming… I can continue and continue."

Hughes added: "We have a leader of the free world that is not a politician. In some ways, it's a good thing, because we have somebody that has broken through that maybe will be able to deal with terrorism. I think he's gonna be a tough guy. But will he able to deal with [Russian leader Vladimir] Putin? Will he be able to deal with the Chinese? Will he take a look at global warming? I'm not sure. He needs to gather around him some very, very, very smart Americans. And God help us all."

During the same interview, Hughes was asked for his opinion on Brexit, which refers to Britain's decision to leave the European Union, an economic and political partnership involving 28 European countries. He said: "Breaking away from European economy was something that I think has affected people that live outside of the U.K. It has affected me for sure, as I'm American and British. I think it was the wrong decision. It's difficult for me to comment, because I live in California for 43 years. But it's affected us economically. It's affected the people that live outside of [the U.K.] that get paid from England, like I do. So it's not good for my economy. It's ridiculous, you know. But I think it was a very foolish decision."