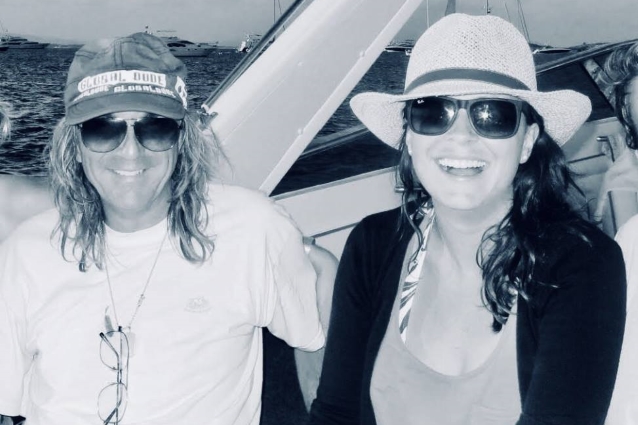 JUDAS PRIEST launched Glenn Tipton Parkinson's Foundation last June in honor of the musician, who is suffering from the degenerative neurological disorder.

Earlier this week, Karina started a GoFundMe campaign to allow PRIEST fans and others to donate online. As of presstime Friday, it has raised £2,136 of its £2,500 goal.

In her introductory message, she wrote: "As many of you know, my Dad (Glenn Tipton) has Parkinson's. It affects so many aspects of his life, and sadly has recently forced him to retire from full-time touring (the tremors causing problems with coordination that impair the speed and accuracy of guitar playing). My Dad is ever the fighter and has an amazing positive attitude trying to battle this cruel disease. JUDAS PRIEST have set up 'The Glenn Tipton Parkinson's Foundation' in his honour, all proceeds raised from the foundation will go directly to a 'pioneering new treatment called MR guided focused ultrasound thalamotomy which although in its early stages has already had great success with a Parkinson's related condition called essential tremor.' Dad is keen to make a difference to help other people fighting the disease, and I'd love to support him. I'm participating in the Barcelona Marathon (10th March) to try and raise some funds. Any donations are hugely appreciated! Karina x"

Tipton, who was diagnosed with Parkinson's disease five years ago — after being stricken by the condition at least half a decade earlier — announced in early 2018 that he was going to sit out touring activities in support of PRIEST's latest album, "Firepower". The guitarist, who is now 71 and has performed on every PRIEST record since the band's 1974 debut set, "Rocka Rolla", is not quitting the band, but simply cannot handle the rigorous challenges of performing live. He is being replaced on tour by "Firepower" album producer Andy Sneap, also known for his work as the guitar player in NWOBHM revivalists HELL and cult thrash outfit SABBAT.

In a statement announcing the formation of the Glenn Tipton Parkinson's Foundation, Glenn said: "As you probably know by now, I've had to pull out of the current PRIEST tour due to ill health. I am still doing some shows and joining the guys on stage for some songs and will carry on for as long as I can without compromising the band. So far, when I walk on stage, the audience reaction has been amazing, heartwarming and quite emotional.

"I knew that something was wrong as my coordination and speed were affected and have both been slowly getting worse over the last ten years. Accordingly, when I was diagnosed, it wasn't really a shock.

"Rob [Halford], Richie [Faulkner], Ian [Hill] and Scott [Travis] are playing better than ever and Andy is doing a really great job. They have all given me so much support.

"It was the band that suggested we start a foundation which, although in my name, is really a JUDAS PRIEST foundation. We are selling t-shirts with the slogan 'No Surrender' (a track off the latest album),which is very appropriate considering the determination you have to summon up to get on with life and beat this illness; it's the sort of thing that always happens to 'someone else.'

"There are many Parkinson's-related charities where we could send the funds we raise to which deal with the many different aspects of this disease both physically and mentally, but what really excites me is a brand new pioneering treatment called MR-guided focused ultrasound thalamotomy, which, although in its early stages, has already had great success with a Parkinson's-related condition called essential tremor. Dr. Bain, my specialist who is one of the leading experts in this field, and his colleagues are now turning their attention to treating Parkinson's patients with state-of-the-art MR scanners and are very optimistic as to the positive results that are emerging.

"All proceeds we receive from you will go to this cause and I urge not just JUDAS PRIEST fans but everyone out there to help."

"If you can't get to the shows, you can also purchase t-shirts online at this location.

"We will keep you posted on what you have all raised through this tour so remember… Keep the faith and… no surrender!!"

JUDAS PRIEST will return to the United States in May for a run with fellow classic heavy rockers URIAH HEEP.

As many of you know, my Dad (Glenn Tipton) has Parkinson's. It affects so many aspects of his life, and sadly has...