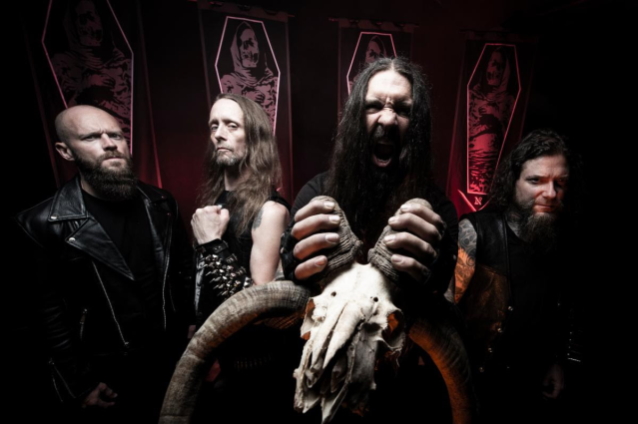 GOATWHORE Announces 'Angels Hung From The Arches Of Heaven' Album

Extreme metal veterans GOATWHORE will release their new album, "Angels Hung From The Arches Of Heaven", on October 7 via Metal Blade Records.

Unquestionably GOATWHORE's strongest, most accomplished album to date in sound, concept, and execution, "Angels Hung From The Arches Of Heaven" emits 47 desolating minutes of the band's trademark fusion of death, black, thrash, and classic metal. Delivered with breathless intensity and an unapologetic bloodlust, the twelve-track offering stands among the most thrilling records to come out of 2022.

"I would describe this record as being very raw, but clarity is shaped within the chaos," reflects vocalist Louis Ben Falgoust II. "It's a journey of everything we've done and some new approaches as we advance forward. When we write, we mainly focus on the music and what we enjoy about playing it. We don't write just to appease others. We want to enjoy playing it in a live setting as well, especially night after night on the road."

Featuring ferocious beasts like the maniacally thrashing "Born Of Satan's Flesh", the old-school, crossover-flavored "Death From Above" with its guttural chorus, and a monolithic title track that is as haunting as it is heavy, the band — Falgoust, guitarist/vocalist Sammy Duet, drummer Zack Simmons, and bassist Robert "TA" Coleman (his first recorded output with the band) — covers a great deal of sonic terrain while retaining that signature nefarious GOATWHORE aura. With an overall tone described by Duet as "dark and evil" and a perpetual sentiment of "impending dread," the record allows little light to cling to.

Lyrically, Falgoust draws from a wide array of influences. "Death From Above" is loosely based on the "Nachthexen", or Night Witches, a group of female Soviet aviators in a bomber division deployed in 1942, a period during which women were in fact barred from combat. Then there's the multifaceted title track, on which Falgoust ventured into an idea of emotional despondency within older texts and writings, feeling like several of these writings missed an element of human nature/emotion. The title of the record — like all of the band's releases — is both deep and direct.

"It's a basis of human despondency, the arc of life, and its relationship with the personal abyss of overwhelming emotion and thought," elaborates Falgoust. "It's a mixture of esoteric ideas and biblical scripts and the journey to the places some people care not to venture on mental paths… The rise and fall of the self and how the abyss can be a turning point for some and a passageway to oblivion for others. It's blunt and to the point, just like countless aspects of life."

Teaming up with producer Jarrett Pritchard (EXHUMED, 1349) for a second time and tracking primarily at Studio In The Country in Bogalusa, Louisiana under pandemic restrictions, GOATWHORE knew they were in good hands. Praising Pritchard as a great person to work with both in the studio and the live setting, Falgoust notes: "He has a good vision of what we are doing and trying to present. He tests you and forces the best performances out of you. Not in a bad way, just that he knows what each person could do prior to us entering the studio, so he has a level of expectation to push each one of us to our own individual performance levels."

"Kurt actually brought a lot to the table," says Duet. "He had some opinions on a few of the song structures, which was a first for us because we never had an outside ear giving ideas. The sound of the record speaks for itself." Final mastering duties were handled by Grammy Award-winning engineer Ted Jensen (GHOST, GOJIRA, CULT OF LUNA).

GOATWHORE also invested greater meaning in the visual components of the album through the use of sigils created by longtime collaborator Jordan Barlow.

"We give him an idea and then he just goes with it," says Falgoust. "We used sigils in the past with our name and other small details, but wanted to make this album more rooted in it. It adds a deeper aspect to our visual presentation. It creates interest and with that inspires questions. We want the listener to delve into this musical journey with us both by sound and vision."

In advance of "Angels Hung From The Arches Of Heaven"'s official unveiling this fall, GOATWHORE has unleashed a video for first single "Born Of Satan's Flesh", directed by David Brodsky.

Declares Duet: "Prepare yourself for an unabashed violent onslaught of Satanic unsoundness of mind! All hail his Luciferian force and might!"

Adds Falgoust: "Welcome to the manifested curse of our latest offering. During the past five years since our 'Vengeful Ascension' release, entwined with a state of isolation within that period, we have been communing with our inner abyss for inspiration. Idle time is truly the Devil's workshop. Feast your eyes (and ears) on this latest display of chaos, which is but a fragment of our impending full-length release out in October!"

"Angels Hung From The Arches Of Heaven" track listing:

01. Invocation 3
02. Born Of Satan's Flesh
03. The Bestowal Of Abomination
04. Angels Hung From The Arches Of Heaven
05. Death From Above
06. Ruinous Liturgy
07. Victory Is The Lightning Of Destruction
08. Voracious Blood Fixation
09. The Devil's Warlords
10. Weight Of A Soulless Heart
11. Nihil
12. And I Was Delivered From The Wound Of Perdition

GOATWHORE will begin its co-headlining run with INCANTATION next week. The "Vile Ascension" tour commences on August 1 in Orlando, Florida and runs through August 27 in the band's home city of New Orleans, Louisiana. Support will come from BEWITCHER and CAVEMAN CULT on select dates.