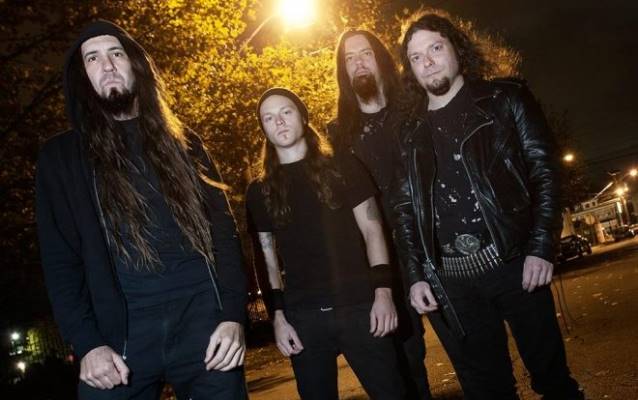 New Orleans, Louisiana's sons of American no-frills-black-metal-meets-death-'n'-roll GOATWHORE have completed work on their sixth full-length album, due later in the year via Metal Blade Records. The CD was once again recorded at Mana Recording Studios in St. Petersburg, Florida with producer with Erik Rutan (HATE ETERNAL, CANNIBAL CORPSE, MORBID ANGEL) and was mastered by Alan Douches at West West Side Music (SEPULTURA, SUFFOCATION, UNEARTH) in New Windsor, New York.

Says Rutan: "I could not be more proud of all our efforts.

"This is my fourth album with GOATWHORE and their loyalty and commitment is something I respect tremendously.

"To record mostly to analog was incredible and the results exemplify that. Amazing tones and performances. This is the real deal!"

He adds: "It takes a lot of guts to record an album to tape in a day and age of metal where conformity and sterility are more commonplace then originality and vibe.

"It has been nine years since I have recorded anything to two-inch tape, since HATE ETERNAL's 'I Monarch' and SOILENT GREEN's 'Confrontation', but I guarantee it won't be my last!

"I cannot wait for everyone to hear this album and I give GOATWHORE my complete and utter respect.

"It has been an honor to work with GOATWHORE once again and I thank them for bringing out the best of me! Performance over perfection."

GOATWHORE's last album, "Blood For The Master", sold around 3,100 copies in the United States in its first week of release. The CD landed at No. 4 on the Top New Artist Albums (Heatseekers) chart, which lists the best-selling albums by new and developing artists, defined as those who have never appeared in the Top 100 of The Billboard 200. The band's previous albm, 2009's "Carving Out The Eyes Of God", opened with around 2,700 units to land at No. 16 on the Heatseekers chart.

"Blood For The Master" was released in North America on February 14, 2012 via Metal Blade Records.