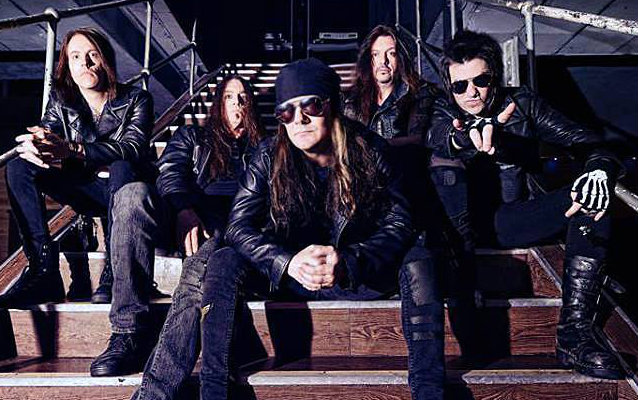 SKID ROW will play a song on opening night of 500 Songs For Kids on April 10 at Smith's Olde Bar in Atlanta, Georgia. All proceeds will go to the Songs For Kids Foundation, which brings musicians year round to children's hospitals across the United States.

Songs For Kids Foundation is a 501(c)3 organization that was founded in 2007 with the mission to enrich the lives of children suffering from illness or hardship. They work year round to bring music to children's hospitals and special needs camps through live interactive concerts, hospital bedside performances and the Songs For Kids Records songwriting and recording program.

SKID ROW has finished recording "United World Rebellion - Chapter Two", the second in a series of EPs that the reincarnated band — Dave "Snake" Sabo (guitar),Rachel Bolan (bass),Scotti Hill (guitar),Johnny Solinger (vocals) and Rob Hammersmith (drums) — plans to release in the near future. The CD was laid down at Cock Of The Walk studio in Kennesaw, Georgia.

SKID ROW's last EP, "United World Rebellion - Chapter One", was released in Europe on May 24, 2013 via Germany's UDR Music. The European version of the EP includes two bonus tracks, both of them cover tunes: "Fire Fire" (EZO) and "United" (JUDAS PRIEST).

"United World Rebellion - Chapter One" sold around 1,500 copies in the Unted States in its first week of release. The CD was made available in North America on April 16, 2013 via MRI.