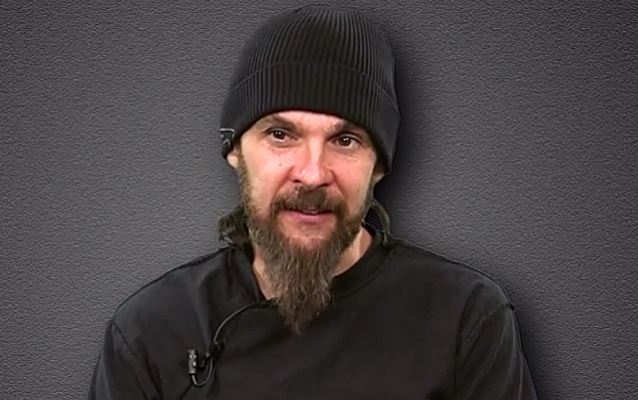 Australia's Metal Ignition recently conducted an interview with GODSMACK bassist Robbie Merrill. You can now listen to the chat in the YouTube clip below. A couple of excerpts follow (transcribed by BLABBERMOUTH.NET).

On GODSMACK celebrating its 20th anniversary this year:

"Yeah, it's been a long time coming. Actually, you just said it: 20 years. That's kind of crazy. It's nuts that we're still together and still friends and still talk to each other. That's the best part of it. We've gone through a lot in the 20 years. We just managed to stay together, and it's pretty cool."

"We started… It was funny, 'cause Sully [Erna, vocals/guitar] had called me up. He was a drummer. He played in a thrash band. And he said he wanted to sing and play punk. And I kind of laughed at him. And then a couple of months later, we [got] together with a guitar player. It wasn't punk; we were just making music. He was on the drums. When we couldn't really find a singer, he goes, 'I'm gonna make a try at this.' So that's how we started. We just started writing and writing, and we got better and better and better, and got to a point where we, basically, put the CD out on our own. We did a bunch of showcases. None of the record labels showed up. We were selling the CD out of the trunk. And probably about nine months later, it was funny, we were at [a restaurant] with all the labels at this big room, and we got signed. We already signed, but other labels still wanted to come out and try to talk us out of it and try to [convince] us to jump on with them. But we kind of laughed at it. It was, like, 'You missed the boat.' And the rest is history. The first record sold, like, five million records, and we've been going ever since. We got signed in May 1998."

On how GODSMACK managed to get the attention of record labels early on:

"Man, we just never would give up. We started our own scene. We'd go to Boston and nobody was there. And then we just started playing around the area. And we kept on playing certain clubs within a half hour from Boston and we just kept on pounding it. We were a really good live band, and people started showing up, and more people showing up. And a [radio] DJ, Rocco, from WAAF, started playing us on the radio, and that helped. It was us just pounding it and being persistent. There was another band, too, that you probably know of, STAIND. They were from Springfield, Massachusetts, about two hours away from us, and what we would do with them is we'd go in their area and back them up, and then they'd come in our area and back us up. So we'd be playing in packed houses all over the place before we got signed, so at least six months or so. So we built our own scene. That's pretty much how we did it. I feel bad now, 'cause the bands that are upcoming now, it's even worse. All the record labels are not signing rock bands anymore, and everything's on YouTube and you've gotta go through all that social-media stuff. We did it just meat-and-potato type — just go out there and play."