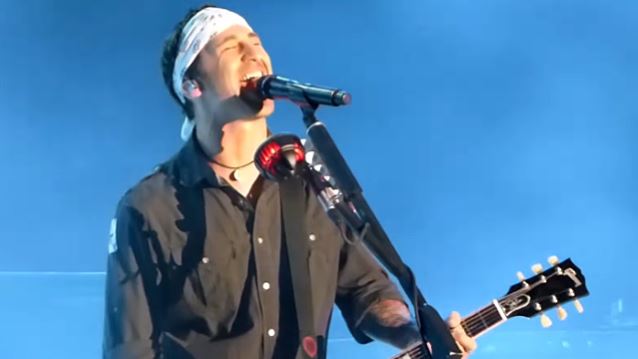 Mistress Carrie of the Worcester/Boston, Massachusetts radio station WAAF recently conducted an interview with GODSMACK singer Sully Erna. You can now listen to the chat below.

Speaking about "Something Different", the second and latest single from GODSMACK's "1000hp" (One Thousand Horsepower) album, Erna said: "We're excited about this one, because we really do feel that this is probably gonna be the biggest single on the album, or at least we're hoping it to be."

He continued: "It's a really special song, it's really unique, definitely branching out from what we usually do, and a little bit more on the commercial side of things, but it's still powerful and it has a really big hook and I love the track. It's cool. It's a really unique song that we created. It's not your typical GODSMACK song, but we like to take a risk once in a while. There's just something special about it, so we're hoping for the best."

Erna also revealed that a video for the song is in the works and offered details on what the clip may contain.

"We're actually starting to come up with some concepts now for a new video, and one of the latest, and I don't know if we have it all flushed out yet, but we may be reaching out to all of you guys soon, because we may do a video that incorporates fans submitting material for us," he said. "So that could be really cool. We wanna see if they'll submit things that are just different in their life — something different. Whether you're some kind of unique athlete or you have a unique disability… something that is just unique in your life and special. We may do a really cool video based on people and their differences."

Erna will play a series of solo shows this December. The trek will kick off on December 3 in Verona, New York and will conclude on December 14 in Boston, Massachusetts.