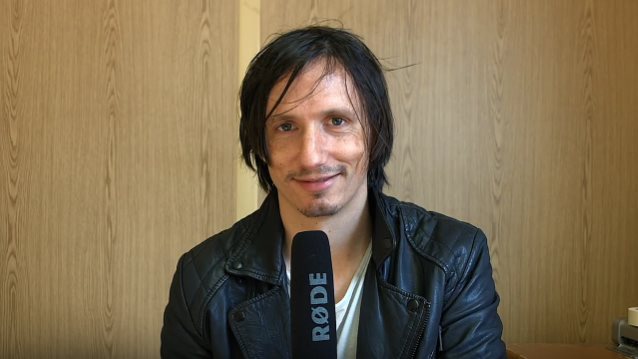 GOJIRA Drummer's Advice To New Bands: 'Love What You Do And Work On Your Songs'

Grasser Production conducted an interview with drummer Mario Duplantier of French progressive metallers GOJIRA before the band's March 30 concert in Munich, Germany. You can now watch the chat below.

Asked what piece of advice he would give a new band that is just starting out right now, Mario said: "I would say just the communication is very important. The four members of the band, we communicate a lot, because there's always tension, like in all… it's a condition of human being. It's how to communicate with each other. And so the four of us, we have the same idea of… it's very important to stay healthy, to communicate a lot. So that's the main rule. Don't do drugs, don't do too much alcohol, and work very hard on the music. That's my advice. Love what you do and work on your songs — more than than on the visual and the band pictures. Work on the songs. That's my main advice."

When pressed about how much of a "businessman" he is when it comes to GOJIRA, Mario said: "We were very bad businessmen, and now we understood it's very important to take care of the economy, of the image of the band, so now we learned how to do it a little bit. But the most important [thing] is to really work very hard on the songs. If the songs are bad, you can work on your image, on your Facebook account, on your Instagram… And after that, of course, now we have a great management — the same as SLAYER and MASTODON. We have a great record company, so they're all doing the job also."