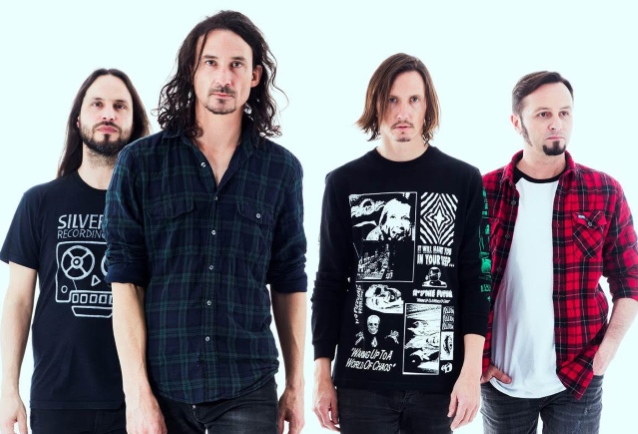 In a new interview with Australia's Heavy, guitarist/vocalist Joseph Duplantier of French metallers GOJIRA was asked if there are plans for him and his bandmates to begin work on the follow-up to last year's "Fortitude" album. He responded (as transcribed by BLABBERMOUTH.NET): "Yeah, that would be a very organic thing for us to do now, to concentrate on an album, 'cause we love putting out music and then going on tour and playing shows. So it's kind of part of a cycle. It's not a great surprise there, unless we call it a day and we split one day, and then there will be no more albums.

"It's an intense life — it's a very intense life — so personally I need to process what happened on the road and I need to spend time with the family," he explained. "I can't jump right back, like I used to do with the guys. Right after the last tour of a cycle, we would be in the studio the day after almost, writing stuff. But I love being in the studio, I love coming up with new ideas, but I really feel the need to be with my family more than ever.

"Also, I would say this: before writing an album, I think it's important to have something to say," Joseph added. "So if you're not recharged, you might repeat yourself or record songs in a weird state where you can't hear anything 'cause your ears are shut. It could be dangerous, to produce bad albums."

Two months ago, metallers GOJIRA released a new song titled "Our Time Is Now". The track appeared on the soundtrack to EA Sports' long-running NHL video game franchise "NHL 23", which was made available in October.

"Fortitude" came out in April 2021 via Roadrunner Records. The follow-up to 2016's "Magma" was recorded and produced by Joseph Duplantier at Silver Cord Studio — GOJIRA's Ridgewood, Queens, New York headquarters — and mixed by Andy Wallace (NIRVANA, RAGE AGAINST THE MACHINE).

In a recent interview with Colombia's Radioacktiva, GOJIRA drummer Mario Duplantier was asked how he and his bandmates go about exploring fresh musical areas every time they are making an album. He responded: "It's not very intellectual; it's not very mental — it's more organic. We jam, and when we hear something cool, we say, 'Let's go.' It's not very we try to catch more people here and there.

Mario's latest comments echo those of his brother, Joseph, who told SPIN in a 2021 interview: "When you start to play bigger slots at festivals in front of more people — when every show on your tour is now a freaking area because you're opening for an arena band — the response, the echo of your song, is different than in a 1,000-capacity club. Sometimes when we end up performing for a large audience and all we have to play is death metal songs, subconsciously we want to adapt our repertoire to a wider audience. We're, like, 'What do we have in our back catalog that we can play and not freak people out? Not so intense and long and epic."