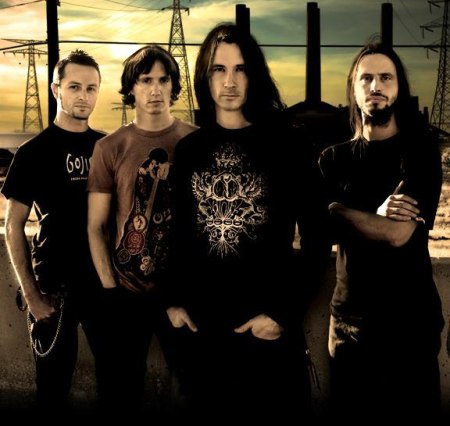 "We are currently working on a live DVD with important bonus section: 'The Way Of All Flesh From The Inside', the Sea Shepherd EP (a non-profit operation with a lot of people involved is a bit complicated to wrap, but we're getting there and we promise to release these songs soon). We're also composing a new album! We've written pretty much half of it, and we are very excited by this new material. It's a big step for us. These songs are original and a good reflection of what we are today. We are so focused on these things that sometimes we forget to communicate with [the fans], but we'll try to post more updates from now on."

During an appearance on the December 3-5, 2010 edition of Full Metal Jackie's nationally syndicated radio show, Joe Duplantier was asked if he's worried about how the GOJIRA fans will react to the band being involved with an organization like Sea Shepherd. "I am not worried at all," he replied. "I don't care about these reactions, really. What I care about is mostly where I put myself and what kind of energy in my life, why I do things.

"This is something very, very, very important to me, to do this, but it's not on a political level... It's also political, of course, but it's more on a spiritual level. I like to feel that I am part of something that goes in the right direction, something that has sense. And being famous is really cool, having a lot of money is really cool — making money and all that — but it's not the most important [thing] for me."

On what prompted GOJIRA's involvement with Sea Shepherd:

Duplantier: "I saw a movie called 'Sharkwater'. It was made by a guy [Rob Stewart] who is involved with sharks. And he just wanted to film sharks; he's diving in the ocean and he hugs sharks and he's trying to present them as they are — not like a threat or a danger or monsters, but just animals [who are] beautiful. They have the right to live. It's not just because they're dangerous that we should kill them all. And the fact is that more than 90 percent of the sharks on the planet disappeared over the last 30 years only — like, they're almost gone.

"It's really sad; it made me cry when I watched this movie. And in this movie you can Sea Shepherd in the second half of the movie, they're in the movie all the time, because they meet on the... It's like a road trip — he's [Rob Stewart] filming himself all the time — and he meets the guy from Sea Shepherd and they help him to save some of the sharks.

"They're facing a huge problem with the international mafia who's dealing with shark things, for the Japanese mostly, to put them in the soup. So they catch sharks and they cut the things [fins] and they throw back the sharks in the water and they just die like that. A lot of poor countries do that so you could also care about these people trying to survive and fishing and selling.

"I don't know... It seems like there is something super-important and there are laws [regulating shark finning], but there is no enforcement to make sure that they don't catch the sharks.

"I'm talking about sharks, but it's the same problem with whales and dolphins and tuna... All these species are just disappearing from the planet because everybody wants to eat them or catch them for their fat, skin, bones, fins, for makeup products or even for weapons... Some parts of the whales are used to build weapons.

"After [seeing the 'Sharkwater'] movie, I was, like, 'Holy crap! What can we do for that?' And what I feel is when you are an artist and you start to have the attention of the people and people actually listen to you and what you're saying, I think you have a responsibility towards the planet and towards the people. We have to think about what we are saying and what we are doing. And [when it comes to the new GOJIRA] EP, I feel exactly at the right place when I do this.

"There's a lot of confusion in the world in general. Everybody is in survival mode all the time. And we created this opportunity in our lives to stick the head out of the gutter and stop surviving and try to do something to live, really, like human beings."