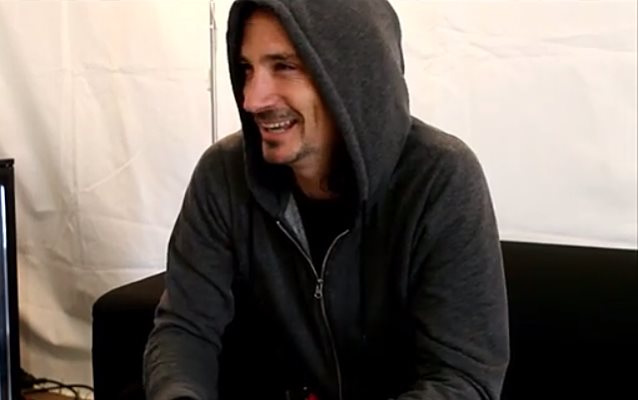 Niclas Müller-Hansen of Rocksverige.se conducted an interview with guitarist/vocalist Joseph Duplantier of French progressive metallers GOJIRA before the band's May 30 concert in Stockholm, Sweden as the support act for METALLICA. You can now watch the chat below.

On the progress of the songwriting sessions for GOJIRA's follow-up to 2012's "L'Enfant Sauvage" album:

Duplantier: "We record demos, we jam, we work really hard… super hard on the songs. We wanna put out our greatest album. We do things a little differently. We dump songs, we dump rifs, which we never did before. [In the past] we would prepare 12 songs, get in the studio and record them just exactly as they are on the demos. We decided to do it differently this time. So [on previous albums] we would push each song to its maximum until it becomes really good. But this time we wanna select them right away. [If we come up a riff that sounds slightly] boring [from the start], we [get rid of it] instead of [spending time] trying to make it more interesting. So we have at least 20 songs — like, the main ideas, the core of each one. But we still need, now, to work on putting all the stuff together, but we have a lot of material that we really love this time. It's kind of challenging for us, also, 'cause the style is changing a little bit. We have some PANTERA-ish kind of riffs, which is kind of new for us. But we wanna… Because we want to… We want [the riffs] to be a little punchier sometimes."

On when they know a song has fulfilled its potential:

Duplantier: "You know it when you wanna hear it fucking 65 times in the same day. When you reach that point… You feel like the song, 'My God, it's a great song.' And you listen to it once or twice, and you're, like, 'There's something wrong.' And it's a big fight, it's a lot of headache, because after a while, you get sick of all these riffs, so you just wanna dump them. And then you have to stop everything for six weeks at least — almost, like, a month and a half — so, actually, that's why touring [in between writing sessions] is not a problem. And then when you come back to it, sometimes you have to start over everything. It's a lot of headache, a lot of work to get to that point. But when you get there, man, everything comes together like a killing machine. It's an awesome feeling. And we feel that once in a while with these songs. So we're trying to get there as much as possible. I'm not scared to say that this is going to be our best record."

On whether they will cut down those 20 song ideas to 12 or 13 complete tracks to record for the next album:

Duplantier: "Even to less than that. I want a short, very dynamic kind of album. But we have so much material; we could release three records or something. We believe in simplicity. When we release a record, we do it the old-school way. We could release a song once in a while and that's it. It would be better for these days to do it this way. I think that's what bands will do in the future. I think albums are dying. I think bands are going to work for a week at the end of a tour, release a song and go back on tour. And here you go — the fans are excited… But we're so old school. We still wanna have that big chapter in our career that we call albums that are so important. It's like a personal Bible that we're writing; it's very intense."

On who will produce the next GOJIRA album:

Duplantier: "Me. I wanna produce it. I have to do it myself somehow. It makes me feel great. I love it. That's what I do. It's what I like. I wanna do it. So everybody's, like, 'Oh, you should work with a big producer.' I don't think so. It could be a very personal sound, it could be a very direct dialog with the fans, without the interaction of anyone. Even if it's a great person, this person is still between us and the fans."

On March 11, GOJIRA released "Les Enfants Sauvages", a limited edition 5" x 7", 60-page hardcover photo book chronicling the band's journey around the world over the last two years, since the release of "L'Enfant Sauvage". The images were taken around the globe, spanning over 150 shows on three continents, and were hand-selected by GOJIRA guitarist/vocalist Joseph Duplantier and his brother, drummer Mario Duplantier. The package also includes a live CD and DVD capturing last year's performance at the legendary Brixton Academy in London, England.