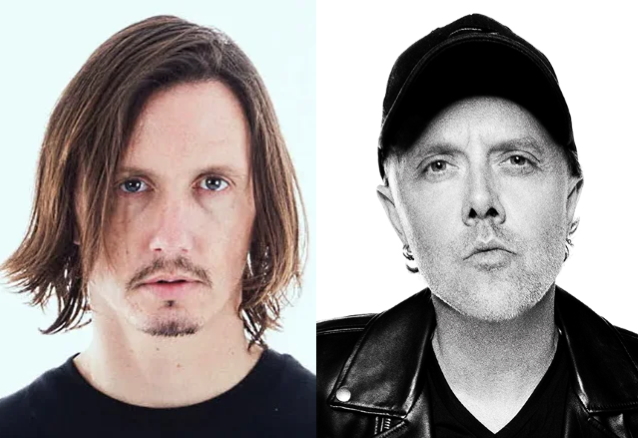 GOJIRA's MARIO DUPLANTIER: 'LARS ULRICH Is A Genius' And 'Best Showman Drummer In The World'

GOJIRA's Mario Duplantier recently spoke to Metal Hammer magazine about the 10 drummers that changed his life. Among Mario's biggest influences is METALLICA's Lars Ulrich, who was "probably the first drummer that really made me pay attention," Duplantier said. "I was maybe ten or eleven years old and my brother [GOJIRA frontman Joseph Duplantier] had received the METALLICA 'Live Shit: Binge & Purge' video boxset for Christmas. We were sat watching it and I couldn't take my eyes off of Lars; the way he was playing, the color of the drumheads, the movement… it was all so badass. Right away I was telling my brother, 'That drummer is the best in the world!' That was when I decided I wanted to play drums.

"Lars is a genius," he continued. "If you listen to the first five METALLICA albums, the drumming is so special, particularly the way he writes those patterns. Even now I think he's the best showman drummer in the world. I'ts not about the tempo or technicality — it's something else. Nobody could imagine METALLICA with another drummer."

Duplantier previously praised Ulrich in a 2014 interview with U.K.'s Rhythm magazine. He said at the time: "I started playing drums at 12 years old. At that time, my big brother was in a band and was a big influence on me. He introduced me to music and spontaneously I wanted to play drums.

"Maybe the first time I saw a video with the big thing called drums was Lars Ulrich with his white Tama drums. That was a big shock for me and right away I wanted to try. Lars was my biggest influence, maybe the only influence I had starting out.

"After that, I started listening to more metal and got into SEPULTURA with Igor Cavalera on drums, Igor and Lars were my biggest influences and then I discovered more extreme music."