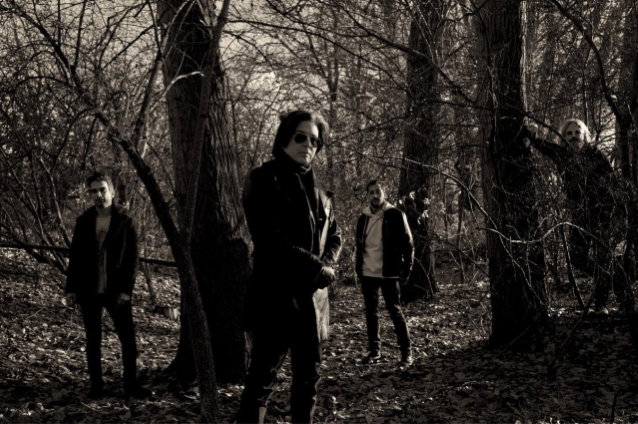 GONE IS GONE Feat. MASTODON, AT THE DRIVE-IN, QUEENS OF THE STONE AGE Members: 'Everything Is Wonderfall' Music Video Available

GONE IS GONE, the project featuring MASTODON's Troy Sanders, AT THE DRIVE-IN's Tony Hajjar, QUEENS OF THE STONE AGE's Troy Van Leeuwen and guitarist-keyboardist Mike Zarin, has released the official music video for a new song called "Everything Is Wonderfall". The track delivers a powerful mantra, a meditation of an uncertain universe that we may be in tune with but is not in tune with us, capturing a heavy and dark melancholic sound and lyrics mixed with rock riffs and mid-tempo bass.

"As the world was locking down and musicians were figuring out a new normal, we were fortunately and unfortunately doing what this band has always had to do to continue creating," Hajjar said. "This song was started with a jam and then cut up and edited to be fitting to a new sound that we are trying out. We want our songs to be able to fit in a band format or switch into an electronic based format that can live on its own as a second arm of the bands sound. Looking forward to everybody hearing the rest of the songs."

The video for "Everything Is Wonderfall" was once again created with Freangel Pacheco, who collaborated with the band on the "No One Ever Walked On Water" clip. Due to the current pandemic preventing the band from coming together in person, each bandmember filmed himself performing the song and worked with Freangel to create a visualizer that represented the central themes of the song; that this a person trapped in an endless cycle, a frustrating monotony, an inescapable rat race type of existence that's chipping away at his/her psyche. The chorus is looking at the bright side of life; to wonder. And as the song is ending, it shows that we are in a cyclical pattern: Wonder, fall, repeat and ultimately falling.

"Everything Is Wonderfall" is available on all digital platforms on Clouds Hill.

Inked into your skin
Stories of the past

And we fade in time
Take ahold of yourself

Can you soak it in
Circle is the path

None of your concern
Darkness has arrived

"Everything Is Wonderfall" is the first new music from GONE IS GONE since the release of "No One Ever Walked On Water" last December. Prior to that, GONE IS GONE issued "Phantom Limb" in November 2017 as part of a seven-inch red vinyl single for Record Store Day's Black Friday.