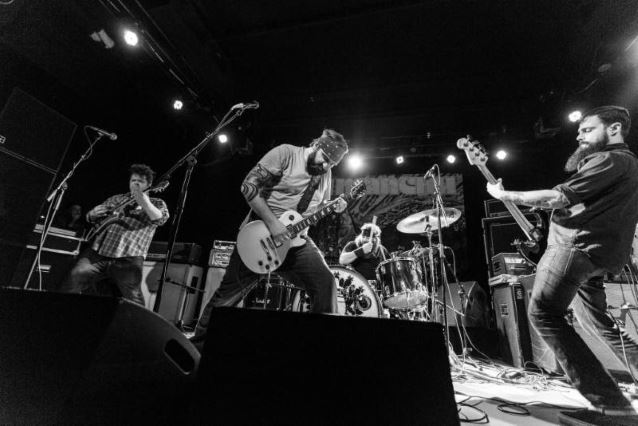 Blacklight Media/Metal Blade Records has announced the signing of Boston's rock/metal outfit GOZU to a worldwide deal. Formed in 2010, the four-piece has released one EP and three full-lengths to-date, and is currently writing their fourth studio album, set for a 2017 release.

GOZU comments: "We are extremely excited to be signed to Blacklight Media/Metal Blade Records, started by celebrity chef Chris Santos and partnered with legendary Metal Blade founder and CEO Brian Slagel. The four members of GOZU couldn't be happier. This is why we plug in every night."

Santos adds: "I caught GOZU at Brooklyn's Metal Bar Lucky 13 Saloon and they blew me away. By the second song in their set, I began sending Brian real-time video of the show. GOZU represents the bands that I look for for Blacklight Media; it's hard to articulate, but you know it when it grabs you by the throat."

GOZU heaves the rock yet embodies the soul on its past releases. Comprised of Marc Gaffney on vocals and guitar, Doug Sherman on guitar, Joe Grotto on bass, and Mike Hubbard on drums, the band's sound is tailor-made for blasting out the car speakers via international radio airwaves. Having already been aired on national television (USA) via MTV ('Road Rules', 'Dudesons', 'Real World'),NBC and NASCAR, GOZU aims to take their critical and commercial success to new heights on their upcoming debut for Blacklight Media/Metal Blade, with worldwide touring to follow. Previously, the group shared the stage with the likes of ST. VITUS, PALLBEARER, LO PAN, STORM OF LIGHT, HELMET, ELDER, MOS GENERATOR and FU MANCHU in the States, as well as YOB, CHURCH OF MISERY and KVELERTAK in Europe at Roadburn (Netherlands) and DesertFest Berlin (Germany). 2017 will surely see GOZU back on the road again.