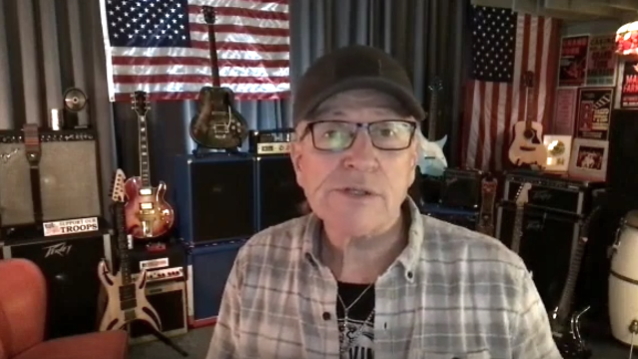 In a brand new interview with Sofa King Cool, former GRAND FUNK RAILROAD singer Mark Farner was asked how it feels to see various rap and hip-hop artists inducted into the Rock And Roll Hall Of Fame before the band he co-founded more than five decades ago. He responded (see video below): "Well, it just shows the illegitimacy of that Rock Hall. And the people are definitely smart enough to know this. They need to be reminded, though, that the Rock Hall is not a representation of the will of the people; it is a representation of the will of the owners of the Rock Hall. That's what it is, and it is super political. And Steve Miller didn't have a good time there. I read some stuff that I just feel for him.

"You know something? I feel great about receiving the Cherokee Medal Of Honor," he said, referring to the award he received from the Cherokee Honor Society during a 1999 concert he performed in Hankinson, North Dakota. "I don't need to be in a Rock Hall. 'Cause without the people's opinion, it's fake. It's politicized, and, brother, it just ain't real."

Eligible since 1994, GRAND FUNK RAILROAD released 11 albums between 1969 and 1976, all of which went gold or platinum. "We're An American Band", "Some Kind Of Wonderful" and "I'm Your Captain (Closer to Home)" helped define 1970s rock and roll.

Farner wrote more than 90 percent of the GRAND FUNK music catalog and was always known as an energetic driving force on stage, the engine that pulled the original GRAND FUNK RAILROAD to the top of the charts. More than 50 years later, he commands the stage with the same intensity, performing epic hits that defined a generation.