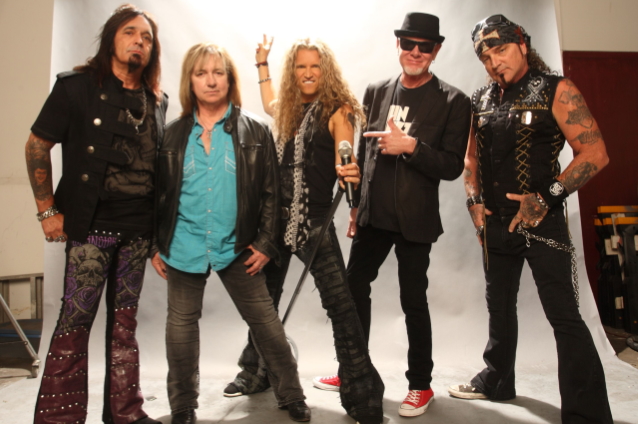 GREAT WHITE Apologizes For North Dakota Concert: 'We Are Not In A Position To Enforce The Laws'

Veteran hard rockers GREAT WHITE have apologized for the conditions at their show this past Thursday night (July 9) in Dickinson, North Dakota. Video footage of the outdoor concert — which was part of the town's "First On First: Dickinson Summer Nights" series — showed there were no safety restrictions at the event, with attendees standing shoulder to shoulder and not a single person wearing a mask.

Earlier tonight, GREAT WHITE released the following statement to BLABBERMOUTH.NET via the band's publicist: "GREAT WHITE would like to address our Thursday, July 9, at First On First Dickinson Summer Nights concert in North Dakota.

As of Saturday (July 11),there have been a total of 4,243 confirmed coronavirus cases in North Dakota. A total of 87 people have died so far in the state as a result of COVID-19. 83 percent of those who have tested positive for COVID-19 in North Dakota to date have recovered from the virus.

Earlier in the month, founding GREAT WHITE singer Jack Russell — who is no longer in the group and who was not at the North Dakota concert — blasted people who refuse to wear a mask in public spaces to protect others from possible infection. He said: "The way it works out, if I just wear [my mask], I'm not that safe. If you put yours on too, I'm 70 percent safe as opposed to being zero-point-something [safe]. It's amazing the amount that it changes. It's, like, if you don't wanna help yourself, help everybody else. 'Well, it's my right. It's my human right.' Well, look, dude, you've gotta pay for your car to get smogged, you've gotta have a seat belt, you have a driver's license, you have to have a license to be born, you have to have a marriage license. I mean, so you have to wear a mask for a while so you don't die. What's the problem?"