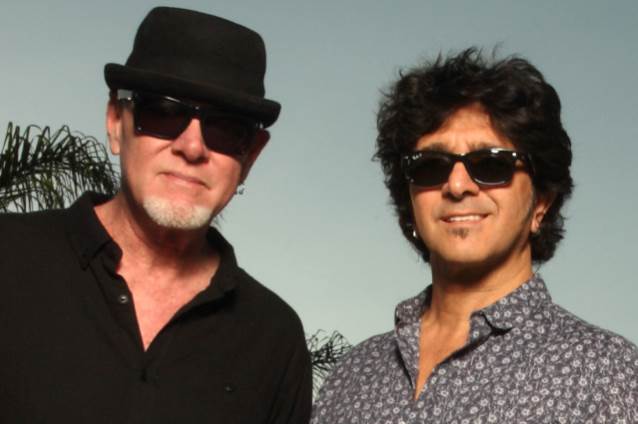 GREAT WHITE guitarist Mark Kendall was recently interviewed by Shaggy of Idaho's 94.9 & 104.5 The Rock radio station. The full conversation can be streamed below. A few excerpts follow (as transcribed by BLABBERMOUTH.NET).

On performing at this month's Idaho Rockfest, a bill that also features Vince Neil:

Mark: "I go way back with Vince. I was actually in a band when I was about 19 years old, and we played at his high school. He was right in front of me. My friend told me, 'You see that guy over there? He's a singer.' I go, 'Oh, really?' He was pointing at Vince. I go, 'What band is he in?' He goes, 'Oh, he's not in a band. He just loves to sing.' And then, like, two years later, he was in this band called ROCK CANDY, and we played a battle of the bands with him, and they finished in third and we got fourth. I've got history with Vince, so we usually have a lot of fun playing with him."

Mark: "The reason we did that is, we were one of the first bands to play on MTV's 'Unplugged'. My manager called me the night before and said to learn 'Babe I'm Gonna Leave You', because Jack [Russell, original GREAT WHITE singer] really liked ZEPPELIN and he used to do it real good. Then the fans just tortured us to play ZEPPELIN. We had the Christmas season off, so we go, 'Let's go do three shows and we'll do nothing but LED ZEPPELIN.' We just played and rolled tape and recorded it, and then it sat around for a long, long time, and then we had time off again, so we put it together and put it out for the fans."

Mark: "We were kind of just growing apart from Terry a little bit. He's still a great guy and a wonderful singer. I just happened, in my news feed, I saw this VAN HALEN story... Mitch [Malloy] had done some gang shouts with, like, twenty people on our last record, so I saw him there, and then he came on stage with us on the [Monsters Of Rock] cruise, and then I kind of accidentally saw this VAN HALEN story, [a] short documentary about when he was in VAN HALEN briefly. I watched that, and I didn't even know. It wasn't, like, by design, the way we got him, but Michael Lardie had been thinking about him too for some reason, and then our agent had mentioned to Lardie about him, but nobody was talking to each other, really. Michael never said anything to me; I just happened to see that. I heard him sing on a couple solo things he did, and we were kind of growing apart from Terry a little bit — not really for any reason. Nothing like big fights or anything. I don't know — it kind of wasn't working. We were uncomfortable. I go, 'Well, let's send [Mitch] some music — some old stuff and some new stuff — and we'll see what he sounds like.' He sounded incredible, and he was interested, so that's why we moved on. He's killing it live. He's a great fit. We've been playing really good shows with him."

On what the future has in store:

Mark: "We want to make new music with Mitch. Obviously, we want the fans to recognize the songs. Terry did a lot of his own stuff [vocally], and it might have been a hair too much. Nothing against Terry — he's such a good singer. He's an amazing singer, so I know he's doing to do great. I just thought, 'Let's get a little closer to the original, but interject your own personality into things,' and that's pretty much what [Mitch is] doing. He doesn't want to become a clone or anything like that, but still, the songs have to be accurate so people know what they're listening to. We're looking forward to getting into the studio with Mitch, probably in 2019 because we have so many shows, it's kind of impossible right now. We'll get into the studio with Mitch next year and make some music with him."

Mark: "Jack and I have never even, I don't think, in the whole time we were together, even got in an argument. People think, 'Oh, patch things up.' We have nothing to patch up. It's just that he kind of went off in this dark world and couldn't get out of it, and we didn't know what to do. Instead of getting well and coming back, he came with a lawsuit. He wanted to get, like, cover band guys and just play GREAT WHITE songs and take our name, so we really had no choice but to defend ourselves. But I've always been close with Jack as far as being friends. Like a lot of people, he had a lot of demons, and it did damage to him, and that's about it. I've never taken it personally, because I work daily, practically, with recovering addicts. I know some get it and some don't. It never affects me personally. I know Jack's out there singing, so more power to him."

Malloy, a celebrated songwriter and artist now based in Nashville, takes the reins as the third lead vocalist in GREAT WHITE's 36-year history.

Ilous — who fronted GREAT WHITE for eight years, recording two albums with the band along the way — claimed last month that he learned of his firing "through and e-mail and the Internet."

Russell — who continues to tour as JACK RUSSELL'S GREAT WHITE — called the move "deceitful" and "despicable."