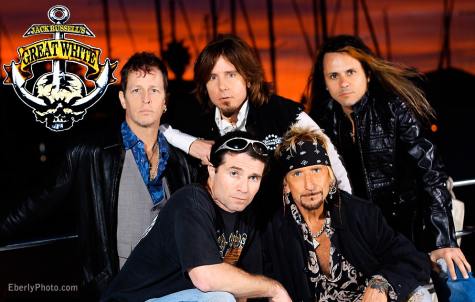 Ryan Harmon of Warrior Rock Radio recently conducted an interview with GREAT WHITE singer Jack Russell. You can now listen to the chat in the YouTube clip below.

Jack's estranged bandmates issued a statement in December in which they claimed that Russell's "frail body" and "drug abuse" have prohibited him from taking part in the band's performances for the past year. They additionally revealed that Jack had undergone "five major surgeries" after his drug abuse got so bad that "his body began to shut down and ultimately resulted in colostomy surgery from a perforated bowel."

In an interview with Metal Sludge, Russell stated about the other version of GREAT WHITE, "I don't care what they say. The proof is in the pudding. Everyone is going to see that Jack is back, that it's all rumors. I mean, do people really give a shit if I'm sober or not? They can come, they'll see I look great, I sound great."

When asked about the rumors of his poor health, Jack said, "I am fine. I just bought a 45-foot boat, and I'm living on it in Redondo Beach, my old stomping ground when GREAT WHITE was its most successful. It's nice to see my favorite sushi restaurant and favorite Italian restaurant are still around. I go fishing three times a week, and I'm in great shape. All these rumors from the other camp about me being not healthy and everyone being afraid I am going to die, it's all B.S. Those guys haven't talked to me in months. They haven't talked to me, so come on, give me a break. Who even cares? I can still sing great. End of story."

Regarding the fact that the GREAT WHITE guys and their manager have a totally different opinion on whether Jack is fit to keep going, the singer said, "They're just trying to make me look bad. They feel scared and threatened, and they should be. They don't own the name. This is my band. Everyone knows this is my band. I started in 1978 and changed the name in 1982. The others, they came in because I was the one who invited them. It was cool for a while before all this crap started. They don't own the name, they don't own the logo. [GREAT WHITE's manager] Obi Steinman sues everyone in the world, but I'm lucid, I'm clear, and I'm sober. Just because I had a rough year and a half does not mean that I gave up on my band. My name has always been synonymous with GREAT WHITE. I came up with the name, and I am entitled to use it. The other GREAT WHITE, with Terry Illous singing my songs and my lyrics, now he's sticking his name into this, covering my tunes. Write your own stuff, dude."