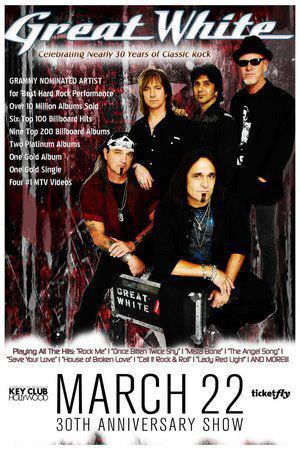 GREAT WHITE To Release New Studio Album In May

Stated Kendall: "We are extremely excited about our new studio album and are looking forward to sharing our new music with you all."

Kendall, Snyder, Desbrow, Lardie and Ilousissued a statement in December in which they claimed that Jack Russell's "frail body" and "drug abuse" prohibited him from taking part in the band's performances for the past year. They additionally revealed that Jack had undergone "five major surgeries" after his drug abuse got so bad that "his body began to shut down and ultimately resulted in colostomy surgery from a perforated bowel." In the statement, GREAT WHITE also insisted that Russell "does not have the right to start his own GREAT WHITE or use the name without our names in the lineup."