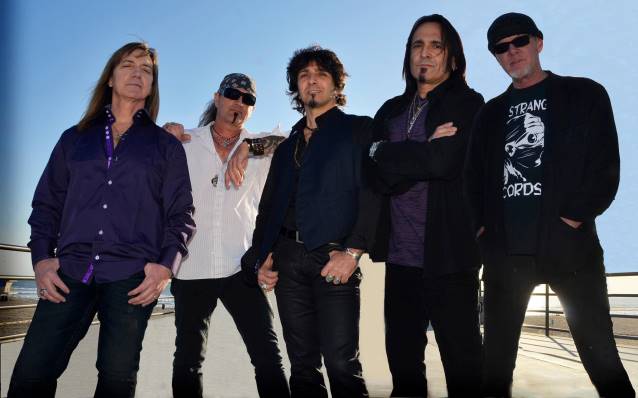 GREAT WHITE's MICHAEL LARDIE, MARK KENDALL Interviewed On 'One On One With Mitch Lafon'

In episode 16 of "One On One With Mitch Lafon", Mitch sits down with GREAT WHITE's Michael Lardie to discuss the band's recently launched official GREAT WHITE TV channel on YouTube. The pair also discuss the band's upcoming touring and recording plans as well as singer Terry Ilous. They also talk about Michael's involvement in the "A World With Heroes" KISS tribute CD, Lardie's cover of the KISS song "Beth", GREAT WHITE's "Elation" album and Michael's time with NIGHT RANGER. In Part 2, Mitch chats with GREAT WHITE's Mark Kendall and his wife Bridget Kendall. Topics of discussion include the launch of the official GREAT WHITE TV channel on YouTube; rhe challenges of being a rock and roll married couple and dealing with everyday life while on the road (from taking care of the family, to paying bills, etc). This was Bridget's first-ever interview with her husband and offers a unique perspective of being a rock and roll family.

The episode of "One On One With Mitch Lafon" was co-hosted by former GUNS N' ROSES and GREAT WHITE manager Alan Niven.

GREAT WHITE's latest album, "Elation", sold around 1,000 copies in the United States in its first week of release. Issued on May 22, 2012 via Frontiers Records, the 12-song CD marks GREAT WHITE's first effort with Ilous following the band's split with founding singer Jack Russell.

This version of GREAT WHITE is not to be confused with GREAT WHITE FEATURING JACK RUSSELL (formerly JACK RUSSELL'S GREAT WHITE),which features Russell alongside Robby Lochner (FIGHT) on guitar, Chris Tristram on bass, Tony Montana on guitar and Dicki Fliszar on drums.

To mark its 30th anniversary live on March 22, 2012, GREAT WHITE celebrated the only logical way — on stage. In a nod to its early days, GREAT WHITE returned to the infamous Sunset Strip, where a storied past of music's biggest fans are fused into the walls of the Key Club. GREAT WHITE delivered its entire repertoire to a packed house, pining for the band's raw energy and cheering its illustrious history track after track.