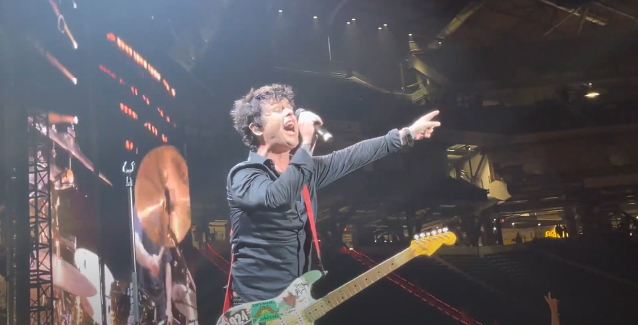 GREEN DAY played a cover of the KISS classic "Rock And Roll All Nite" during its concert Saturday night (July 24) at Globe Life Field in Arlington, Texas. Fan-filmed video of the performance can be seen below.

Paul Stanley and Gene Simmons both tweeted out a short video of GREEN DAY's rendition, and offered their praise for the Northern California band, with Stanley writing: "'Tonight In DALLAS!' Another reason to love @GreenDay!" Simmons chimed in: ""@GreenDay In Houston [sic] yesterday! Thank you, Gentlemen." The official KISS Twitter account also shared the clip and added the message: "@GreenDay 'Rock And Roll All Nite' tonight in Dallas. SO Cool! #KISSisEverywhere!"

GREEN DAY was widely credited with popularizing and reviving mainstream interest in punk rock in the United States. Follow-up albums "Insomniac" (1995) and "Nimrod" (1997) each sold over two million albums and were certified double platinum, and "Warning" (2000) was certified platinum. 2004 brought the band's rock opera "American Idiot" which reignited the band's popularity with a younger generation and sold over six million copies in the United States.

GREEN DAY is one of the world's best-selling bands of all time, having sold more than 75 million records worldwide. The group has won five Grammy Awards: "Best Alternative Album" for "Dookie", "Best Rock Album" for "American Idiot", "Record Of The Year" for "Boulevard Of Broken Dreams", "Best Rock Album" for the second time for "21st Century Breakdown" and "Best Musical Show Album" for "American Idiot: The Original Broadway Cast Recording". In 2010, a stage adaptation of "American Idiot" debuted on Broadway. On April 18, 2015, the band was inducted into the Rock And Roll Hall Of Fame as a part of the 2015 class in what was their first year of eligibility for induction. On October 16, 2015, GREEN DAY released the documentary "Heart Like A Hand Grenade", an unprecedented behind-the-scenes look at the writing and recording of "American Idiot". GREEN DAY's 12th studio album, "Revolution Radio", was released on October 7, 2016 and debuted at No. 1 on the Billboard 200 chart. GREEN DAY released its 13th studio album, "Father of All Motherfuckers" last year via Reprise/Warner Records. It debuted at No. 1 on the U.K. albums chart while also hitting No. 1 on the Billboard Top Rock Albums and No. 4 on the Billboard 200, resulting in the band’s 11th U.S. Top 10 album. They performed on "The Ellen DeGeneres Show", "The Late Late Show With James Corden", "Good Morning America" and "American Music Awards".

“Tonight In DALLAS!” Another reason to love @GreenDay! pic.twitter.com/dPXgicnlEE

.@GreenDay "Rock And Roll All Nite" tonight in Dallas. SO Cool! #KISSisEverywhere! pic.twitter.com/xwh4UNTfyc