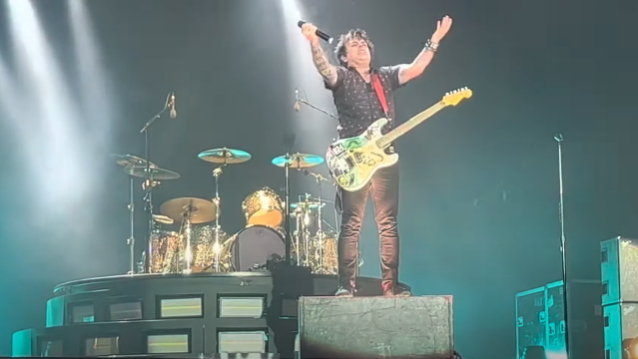 During the band's concert on Friday (June 24) in London, United Kingdom, Armstrong told the audience: "Fuck America. I'm fucking renouncing my citizenship. I'm fucking coming here. There's just too much fucking stupid in the world to go back to that miserable fucking excuse for a country."

He added: "Oh, I'm not kidding. You’re going to get a lot of me in the coming days."

Armstrong continued to lash out at the the five Supreme Court justices who voted to overturn Roe v. Wade at GREEN DAY's Saturday night gig in Huddersfield, England, saying "fuck the Supreme Court of America" prior to performing "American Idiot". He also called the Justices responsible for overturning Roe v. Wade "pricks," according to the Daily Mail.

The 50-year-old musician and his bandmates — Mike Dirnt and Tré Cool — have repeatedly used their musical platform to protest politicians and alleged injustices.

Earlier in the month, GREEN DAY debuted a new banner displayed in the background of its live shows which simply reads: "Fuck Ted Cruz".

In a 2019 interview with Kerrang!, Armstrong said there were definitely political themes on GREEN DAY's 13th album, "Father Of All Motherfuckers", which was released in February 2020, but that he and his bandmates were avoiding direct Trump songs. "I mean, I draw no inspiration from the President Of The United States, because he's just… there's nothing," he said. "Trump gives me diarrhea, you know? I don't want to write a song about it."