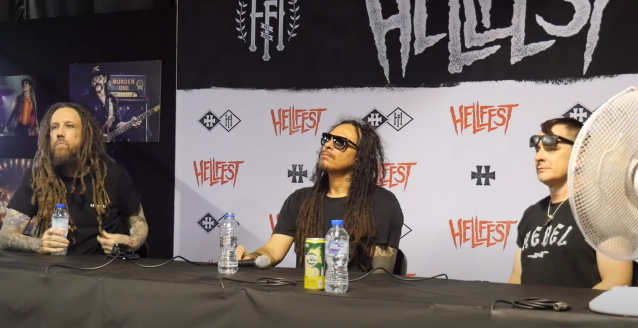 During a June 19 press conference at this year's Hellfest in Clisson, France, KORN guitarist James "Munky" Shaffer was asked about the current status of the band's bassist, Reginald "Fieldy" Arvizu. Fieldy announced in June 2021 that he would sit out KORN's ongoing tour in order to "heal" after "falling back" on some of his "bad habits."

Munky said about Fieldy: "He needed a little time at home with his family to kind of regroup. We decided we were gonna make a record during the pandemic and use that time constructively. And once the pandemic was over and we were ready to go back on the road, he wasn't quite ready to do that yet. So the rest of us were anxious to get back in front of our fans and play for everybody."

Earlier in the month, KORN guitarist Brian "Head" Welch told Kerrang! Radio that he had "been in contact" with Fieldy. "I just e-mailed him the other day," he said. "So we're gonna get together and talk to him, see how he's doing, see where his head is at, after this tour. Me and Munk were just talking about it. We love him, we've been in communication with him, and we'll see."

According to Luzier, SUICIDAL TENDENCIES bassist Roberto "Ra" Díaz, who is filling in for Fieldy, is "doing a great job. He's doing a hell of a job. But there's a sound about Fieldy that isKORN," he said. "There's that signature thing that not many bass players can say that. Just that sound — you pop a KORN album on, and you're, like, 'Woah.' That bass, you take that out and it wouldn't sound normal, because Munky and Head [Brian Welch] don't sound normal, and neither does Jon [singer Jonathan Davis]. But that bass, man, it's just leading a lot of those older records."

"Requiem" was released on February 4 via Loma Vista Recordings.