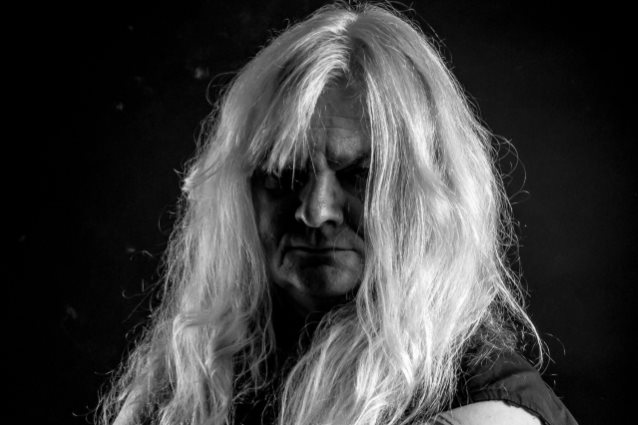 Vocalist Steve Grimmett of STEVE GRIMMETT'S GRIM REAPER, the revamped version of the cult '80s British metal act GRIM REAPER, remains in a South American hospital after being refused flight home when the airline disallowed him to board on Saturday evening. Grimmett has been battling a life-threatening condition for a week after being rushed to a local hospital in Ecuador; the singer was amidst a tour in support of STEVE GRIMMETT'S GRIM REAPER's latest album, "Walking In The Shadows".

Grimmett's wife, Amelia Grimmett, has been updating fans around the globe of the singer's condition via the band's official Facebook page since the reports started to surface on January 14. "[On] Saturday [January 14], whilst doing a gig in Ecuador, Steve was taken very ill," she noted. "He finished the gig sitting down but was transported to a local hospital immediately after the performance where they operated to remove an infection."

In an interview with Jimmy Kay of "The Metal Voice" this past weekend, Mrs. Grimmett further detailed the situation. "The band was only ten days into a South American tour when Steve began to feel ill," she said. "He took some tablets thinking it was maybe altitude sickness. However, during the early part of the band's performance, Steve's health went downhill quickly. He was taken to hospital and rushed into surgery to attempt to remove a growing infection on his foot. The following morning, they scanned him and confirmed the infection had spread. He was rushed back in to surgery and was told he would at minimum lose a few toes, worst-case scenario his foot. Additional tests were conducted and the infection had again spread. On Wednesday, a decision was made for a third operation; one that resulted in doctors removing Steve's right leg below the knee in order to stop the infection that could, if allowed to spread, take his life."

Fans have taken to social media since initial reports started to appear regarding the beloved singer. Now an official fundraising page has been created to help Steve with costs that are quickly rising. Donations can be made here.

Grimmett is currently expected to return to England on Friday. "Steve is booked on a plane to fly home this week," notes Amelia. She shares: "The rest of the band has now flown back so Steve will be on his own in the hospital but he says he's okay. The embassy has promised they will look after him and get him back to the U.K. safely."

Steve Grimmett has issued the following statement: "I would like to thank my band mates for their support and to our fans for doing the same." Amelia adds: "I am overwhelmed with all the messages of support. Even though this was a life-changing operation, it saved Steve's life, and me and the rest of our family are eternally grateful."