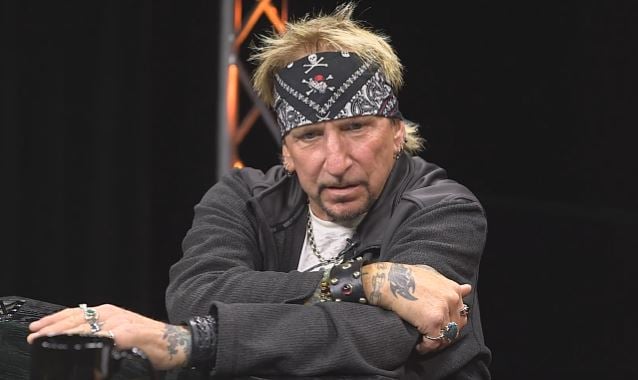 Former GREAT WHITE and current JACK RUSSELL'S GREAT WHITE singer Jack Russell has weighed in on underdog Donald Trump's stunning upset of Hillary Clinton in the U.S. presidential election, saying that he "would take" the real estate mogul "over Hillary any day."

Speaking to Seb Di Gatto for The Metal Gods Meltdown, Jack said about the U.S. election outcome (hear audio below): "You know, I'll tell you what… I would take [Trump] over Hillary any day. To me, she's just a crook. The fact that she hasn't shown her face since then kind of tells you a lot. As far as being a president? I don't know. I mean, I hope he does what he says he does. I think he has the right ideas in mind, but we'll see. I just think now he's getting blamed a lot in the press over here for stuff that Obama did. He's only been in the office one day. It's, like, hey, wait. Give the guy a chance. He hasn't even had a chance to poop in the White House yet. You know what I mean? Give the guy a chance."

He continued: "I'm not into politics, really, and I don't vote. I can't vote, 'cause I'm an ex-felon. But if I could, I would have voted for [Trump]. It wasn't like we had a bunch of choices… He was the one… I've gotta had it to him, man. He pulled it off, and for a guy that's not a politician… And that's what I like about him — he's not a politician; he's a businessman. And this country is just basically a big business, a giant corporation, and it needs to be run like that. It doesn't need to be run by politicians with nothing but their own agendas."

Russell added: "The government has its hands in too much stuff, and it needs to be brought back to the people. Obamacare is the biggest piece of crap ever. I'm paying fifteen hundred dollars a month for insurance, just for me, and I call up and I go, 'Yeah, I need this prescription. My doctor said it's gonna fix me right up.' 'Oh, that's not on your formula. You can't have that.' I'm, like, why is my insurance company telling me how to treat…? Why are they the ones that are responsible for treating me? It should be a doctor. But they say, 'No, you can't have that.' I'm, like, 'Then what am I paying all this money for?' That's a lot of money for one guy, you know, for insurance for a month. That's a lot of money. It's, like, dude, really? I can make a house payment with that, on a nice house."

The singer went on to say: "If they [Democrats] would have won, you wouldn't have seen Republicans out there doing all these demonstrations and stuff. As a matter of fact, I'm looking at one right now — right in front of my marina. I live on a boat — me and my wife. I'm a big sport fisher. And I'm sitting here in the marina office and I'm looking outside and there's a huge march. Everybody's wearing pink bikinis — women's equal rights. I guess they're protesting that they're not gonna get birth control for free; people have to pay for their birth control pills. Well, why not? I've gotta pay for condoms, if I want. Men have gotta pay for their own contraception. Why should women get 'em for free? How is that equal rights?

"People are always doing something or against something. It's just I've never seen the country so divided, and it's sad. It should be, 'Okay, we don't really like him, but let's just give him a chance.' If Hillary would have won, I wouldn't have been protesting. I just would have said, 'Okay, that's the way it is. Let's see how she does.' And I would have probably moved to some other country. [Laughs] I would have been across the pond quick."