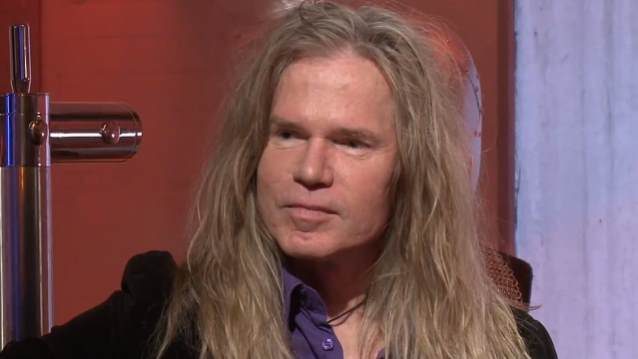 On the possibility of rejoining WHITESNAKE (which guitarist Doug Aldrich recently decided to leave):

Adrian: "Never say never. David [Coverdale, WHITESNAKE mainman] and I will always do something in the future, whether it's with the two of us acoustically or whether it's a blues album or a rock album or a tour. We are too good friends not to do it and we have too much fun working together. But it has to be next to MOONKINGS, not instead of."

On his time in WHITESNAKE:

Adrian: "It was a great period of time. We were really successful, but the most important thing for me is enjoying making music in a great band, and with WHITESNAKE, that's what we did."

On his relationship with David Coverdale:

Adrian: "He wanted me as a kind of partner in WHITESNAKE to write with and to run the band with. We really decided a lot of things together. Of course, it's David's band, and it still is. And I respect that, because he started it. But I never felt it as a 'boss' situation at all, because a couple of times I lived in David's house for almost a year, when we started writing for 'Slip Of The Tongue' and 'Restless Heart'. We [hung] out together, we had dinner together and we were really good friends. A lot of people think David is difficult. I don't think so. I worked with David for 30 years. David knows exactly what he wants and he's a very focused guy. He takes his work very seriously, and if it's somebody in the band who doesn't, then he gets pissed off. He thinks everybody should be as focused and as serious about music as he is. That's how I am too, so that's why we got along very well. We feel you have a responsibility to the audience because your fans pay money to see you and they pay money to buy your records. I think it's an obligation to do the best your can to deliver quality music."

VANDENBERG'S MOONKINGS' self-titled debut album was released on Febuary 24. The CD includes a newly recorded version of the WHITESNAKE classic "Sailing Ships", with a special guest appearance by Coverdale. The track was originally written by Vandenberg and Coverdale for WHITESNAKE's "Slip Of The Tongue" album, a record Vandenberg co-wrote (with Coverdale) but wasn't able to play on due to ill health.