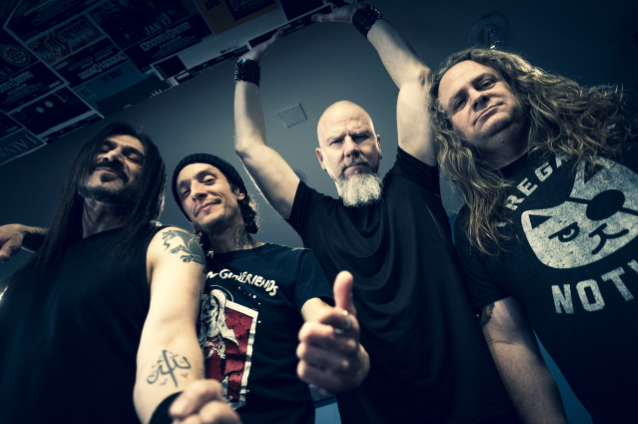 Guitarist Marzi Montazeri has left thrash metal pioneers EXHORDER. The Houston-based musician, who joined EXHORDER in 2017, shared the news of his exit in a social media post earlier today. He wrote: "With all my love to the boys in EXHORDER I have decided to no longer be a part of it!

In the 1990s, Marzi hooked up with SUPERJOINT RITUAL, with PANTERA singer Philip Anselmo as lead vocalist, and appeared on the band's first two demos. By March of 2010, Marzi rejoined forces with Anselmo to work on what became Philip's first solo project since PANTERA, PHILIP H. ANSELMO & THE ILLEGALS. Marzi recorded THE ILLEGALS' debut album, "Walk Through Exits Only", and toured with the band before exiting the group in November 2015. Two years later, Marzi joined EXHORDER, which released its first album in 27 years, "Mourn The Southern Skies", in September 2019 via Nuclear Blast Records.

Vocalist Kyle Thomas is now the sole remaining founding member of EXHORDER, which released its debut album, "Slaughter In The Vatican", way back in 1990. In February 2020, EXHORDER parted ways with its original guitarist Vinnie LaBella, who wrote much of the material on "Mourn The Southern Skies". The remaining members of the group later issued a statement saying that they would fulfill their "touring and recording obligations for 2020 and beyond."

Two months ago, Thomas confirmed to the "Brutally Delicious" podcast that he and his bandmates had spent much of the coronavirus downtime working on material for the follow-up to "Mourn The Southern Skies".

In February 2021, Thomas told "The Dan Chan Show" that it wasn't strange for him to be the only remaining founding member of EXHORDER. "At this point, I've jammed with so many people over the years — so many different lineups for this and that, fill-ins and all this stuff. To me, it doesn't really matter as much who's there, as long as the material that's being played is being played within the spirit of that band in particular," he said. "And the stuff that we're writing now, it's amazing. I play it for a lot of people that are my confidants, people love the band, and they're gonna shoot me straight. And the new stuff that we're working on, everybody's, like, 'Wow. It sounds like EXHORDER to me.'"

EXHORDER, which is cited by many as the originator of the riff-heavy power-groove approach popularized by PANTERA, recently completed a U.S. headlining tour during which it performed "Slaughter In The Vatican" in its entirety.

With all my love to the boys in Exhorder I have decided to no longer be a part of it!
I have a lot going on and it’s beautiful!
I’ll soon let y’all know!
Much love to all,