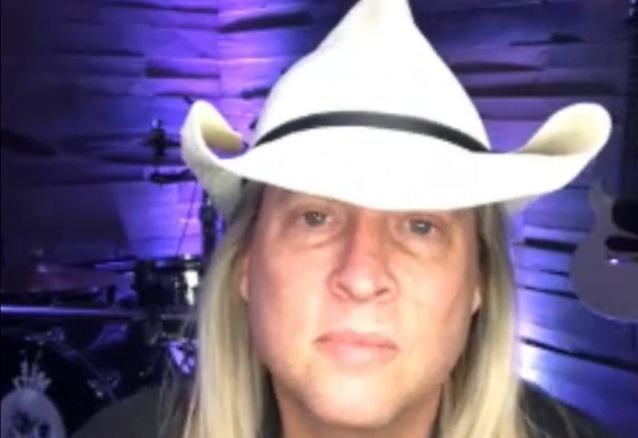 GUNNAR NELSON On COVID-19: 'As Far As The Numbers Are Concerned, It's Just Another Strain Of The Flu'

Gunnar Nelson has taken issue with coronavirus lockdowns around the country, saying that Americans in high-risk groups should be "protected" while "the rest of us get back to life."

Gunnar discussed the hot-button issue during an appearance on a new interview series hosted by TNT singer Baol Bardot Bulsara.

Speaking about how deadly COVID-19 is, compared with several other causes of death in the U.S., Gunnar said (see video below): "In my experience — for real — just as far as the numbers are concerned, it's just another strain of the flu. Whether or not it was made in a lab as a bioweapon, I really don't know. All I know is that the recovery rate is 99.6 percent or something crazy. And if you look at the numbers worldwide, it's the exact same as the seasonal flu that comes in. The people that are at risk are the older folks and the people conditions. I'm not minimizing that, but those are the people, in my opinion, that need to be protected and stay home, while the rest of us go out and do our concerts and get back to life."

He continued: "The one thing they don't talk about is where we all [musicians and entertainers] come in. Our job is to make people feel great; our job is to make people feel awesome. And they love going to shows and putting their fists in the air and having a great time and feeling the community with like-minded people who like the same kind of music. We haven't had that in a year. And people are depressed. Not only are they depressed, they've had enough of being on house arrest and being dictated to about what they can and can't do. Because life is short, and no one wants to spend a percentage of their life they're never gonna be able to get back being locked in their homes, no matter how awesome their home is or isn't. Relationships are getting strained, people are getting depressed, alcoholism is up, drug abuse is up — all of these things that, being in a normal year where we actually can go out and go see shows and hang out with your friends and your family, don't seem to be as much of a factor. So 2021 can't get here fast enough, as far as I'm concerned."

COVID-19 is said to be more contagious, more deadly and causes more long-term complications than influenza.

A recent study showed that COVID-19 patients had an in-hospital death rate two times higher than that of influenza patients.

Gunnar and his brother Nelson are the leaders of their band called NELSON which celebrated the 30th anniversary of the release of its double-platinum debut LP "After The Rain" this past June.

The Nelson are sons of rock royalty — their father was '50s and '60s rock and TV heartthrob Ricky Nelson — and grandsons of entertainers Ozzie and Harriet Nelson, and the nephews of celebrated actor Mark Harmon.

When Matthew and Gunnar hit No. 1 on the Billboard chart with NELSON's "(Can't Live Without Your) Love & Affection", it made the Nelsons the first family in history to have at least one No. 1 song across three generations.