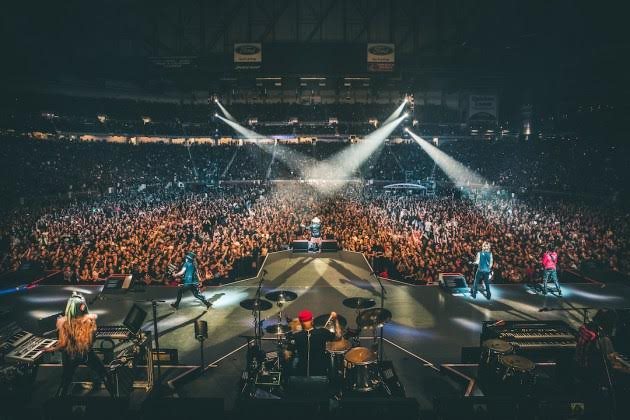 The partially reunited classic lineup of GUNS N' ROSES will embark on a Latin American tour in the fall.

A new report by The Wall Street Journal revealed that of the 25 shows GUNS N' ROSES is playing on its "Not In This Lifetime" stadium tour, 12 have either sold out or are close to it, with concert promoter Live Nation saying it expects to sell out five more on an average ticket price of $130.

While the first two shows in Detroit and Washington D.C. were packed, with 41,000 fans turning up in the Motor City, 27,000 went to see GUNS at Arrowhead Stadium in Kansas City, Missouri. And while the first of two shows at Soldier Field in Chicago was sold out, the second show was far from packed, with one half of the upper deck completely empty.

Asked for a comment, Live Nation stated that the tour was "an unqualified success," adding, "Not only is it the #1 rock tour of the summer, it will be one of the top-grossing tours of 2016 and one of the most successful reunion tours of all time. At six shows into the tour, it has already grossed more than $100,000,000 in ticket sales."

Live Nation exec Bob Roux said that the company expects to sell one million tickets for the tour, roughly 90 percent of what's available. He added that some less well-attended shows were the result of the band playing cities it wanted to play, rather than sticking to the highest population centers that would better guarantee sellouts.

As previously reported, drummer Steven Adler performed with GUNS N' ROSES again on Saturday night (July 9) in Nashville, and also spent some time with Slash, McKagan, Ferrer and Reese during soundcheck. Adler joined GUNS for "My Michelle" and "Out Ta Get Me", the same songs he played with them in his first appearance on this tour last Wednesday (July 6) in Cincinnati.