GUNS N' ROSES: 'Appetite For Destruction' To Be Re-Released On Vinyl With Original Artwork

Universal Music will re-release GUNS N' ROSES' classic debut album "Appetite For Destruction" on vinyl. The LP is due on Tuesday, September 9, 2008 and the cover features the controversial original artwork by Robert Williams.

Go to CD Universe to place your order today and be one of the first to receive this product when it arrives.

Product Description: Already a legend in its own meagre lifetime, this startling debut shrouded itself in controversy, from its original Robert Williams artwork to Axl Rose's unblinking accounts of L.A.'s underbelly. This mawkish storytelling, combined with a brattish collective swagger and a surprisingly mature approach to their songs, guaranteed GUNS N' ROSES a speedy notoriety that was to serve their legend brilliantly. From the laconic "Paradise City" to the achingly beautiful "Sweet Child O' Mine", or the furious "Welcome To The Jungle", the record brims with a brutal integrity. An album they could never surpass even if they had stayed together.

120-gram vinyl LP pressing of their genre-defining debut full-length album, originally released in 1987. The LP cover features the controversial original artwork. **Please note that this vinyl pressing features "For Promotional Use Only" printed on the artwork. 2007 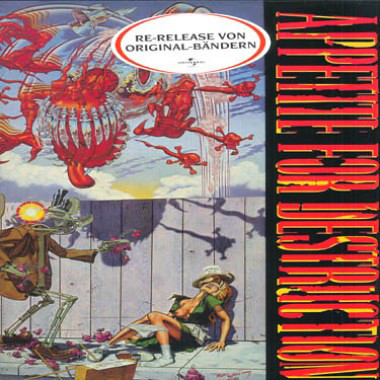