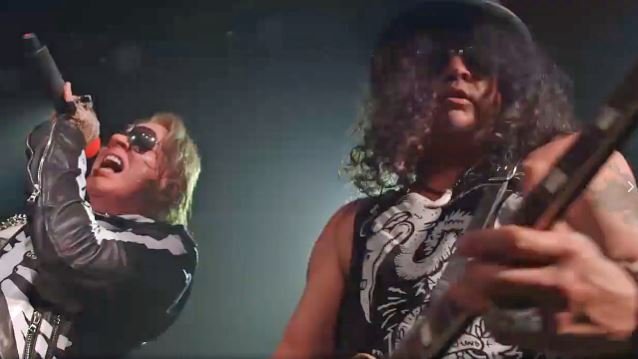 According to The Sun Chronicle, officials have turned down GUNS N' ROSES' request to perform after the curfew in Foxboro, Massachusetts next month.

Selectmen approved an application for the July 19 and July 20 concerts by the Axl Rose-fronted band at Gillette Stadium, but refused to allow the group to play after the 11:15 p.m. town curfew.

The band had asked for an 11:40 p.m. end time for the concerts, a full 25 minutes past the curfew, but Selectwoman Ginny Coppola objected, saying: "This is on a Tuesday and a Wednesday. If this was a weekend, I wouldn't have a problem with it. But it's a work night."

Taylor Swift was granted an 11:40 p.m. end time for her concerts at Gillette Stadium last year, but those shows were held on weekend nights.

Asked how the members of GUNS N' ROSES dealt with Axl's stage tardiness while he was in the band, former GN'R guitarist Gilby Clarke said: "Well, you know, back then [in the early 1990s], we drank a lot, and we got drunk a lot. I mean, that's the thing — we didn't know whether it was gonna be five minutes late or three hours late. It's just one of those things that… it came with the territory. We've all got our pluses and minuses with our jobs. The waiting was a minus."

MEGADETH mainman Dave Mustaine recently brought up Rose's well-established reputation for being late to gigs, saying in an interview: "I love GUNS N' ROSES. I think Axl's a great frontman. I just hope that this thing that happened on 'Jimmy Kimmel' [in January when Axl canceled his appearance on the show] isn't an indication of anything that is going to happen with the [upcoming GN'R] tour. I don't know that there's people nowadays that are gonna be hanging out for three, four hours waiting for somebody to show up."

He added: "If I'm having a good time, I wouldn't mind hanging out for an extra amount of time, if there was something going on. Or, like, say, homie's plane is stuck in traffic and it's hard for them to land the plane right now, so he's gonna be a couple of hours late to the concert versus the guy just doesn't wanna come out right now."

GUNS N' ROSES guitarist Richard Fortus last year defended Axl's tardiness, stating that the singer "goes through a lot to walk out onstage." Richard said: "The last few years, it's been very… It's not like a lot of bands, where it's like clockwork. It's different, and it's never gonna be that, because that's not who [Axl] is. But, man, you know, he's the real deal. He is the real deal. And he lives it, and all he cares about is the music."

He continued: "For the longest time, when I first started with the band even, I thought it was by design. I thought, 'He has this worked out.' 'Cause, you know, it's two hours after we're supposed to start, three hours… and people are… stadiums full of people just booing. And the second he'd walk out on stage, all that energy, all that… on the verge of chaos, of just imploding and everyone just rioting, right at that moment he walks out on stage, and all of that negative energy just goes totally up right into the palm of his hand. I mean, it's phenomenal to watch. And I thought it was by design; I thought that he had figured out some type of way to judge the moment, but it's not. [Laughs] It's not. It's just… That's just what he is. He's not gonna walk out on stage until he is… It's not like he's sitting back watching TV and eating potato chips. Man, he goes through a lot to walk out on stage. Just everything… with being himself… to get into the right place within himself."