GUNS N' ROSES' new album, "Chinese Democracy", sold 21,000 copies in the United States in its sixth week of release to land at position No. 30 on The Billboard 200 chart. The CD has shifted 502,000 units since it was released on November 23, 2008 as a Best Buy exclusive after a wait of more than 15 years. (Note: An album is eligible for gold certification by the Recording Industry Association of America after it has shipped 500,000 copies in the U.S.)

Analysts have been going over what happened to "Chinese Democracy", which sold 261,000 copies in the United States in its first week of release to debut at position No. 3 on The Billboard 200 chart. The most immediate comparison has been to AC/DC's new "Black Ice", which also came out through a single retailer, in this case Wal-Mart, and sold nearly 800,000 copies in its first week after an eight-year gap between albums.

But AC/DC did interviews, online initiatives and TV appearances to promote their album, also launching a major North American tour days after its arrival. GUNS N' ROSES has not scheduled any live dates, and frontman Axl Rose — the band's sole remaining original member — has not granted any official interviews although he did take part in two question-and-answer sessions on GUNS N' ROSES fan boards last month. He also responded to further questions about the breakup of the original lineup and other issues in a lengthy, nearly 5,000-word post at MyGNRForum.com. In the post, Rose gives his side of the story, in sometimes hard-to-follow fashion, regarding how he came to own the band name, why all the other original members left the group and whether it's right for him to keep using the name when he's the only founding member left.

Some have also suggested that Best Buy was far less experienced at this sort of release, while Wal-Mart pioneered it with albums from the EAGLES and GARTH BROOKS. The retailer paid $14 million for 1.6 million copies of the GUNS N' ROSES album, according to Hits.

Kevin Cogill, who was arrested in August for allegedly leaking nine tracks from the then-unreleased "Chinese Democracy" album online through his blog, pleaded guilty violating federal copyright laws in a Los Angeles court on December 15. According to the Associated Press, Cogill's plea deal requires him to cooperate with investigators and may lead to a sentence of up to a year in federal prison, probation and a large fine. 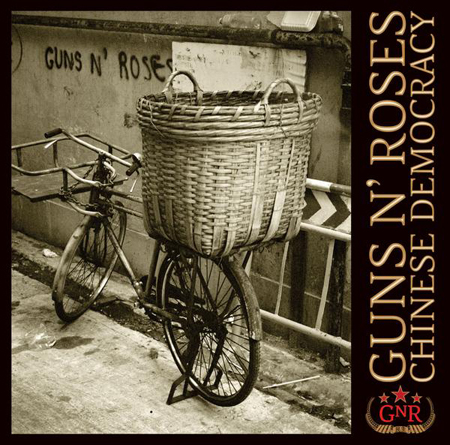