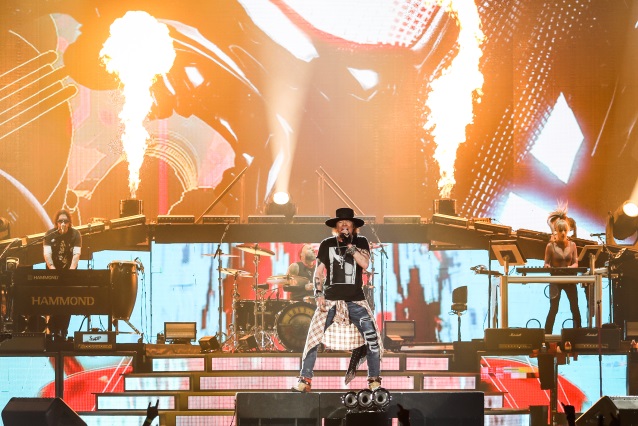 According to The Pulse Of Radio, GUNS N' ROSES concluded its 18-month "Not In This Lifetime" reunion tour with a nearly four-hour, 37-song concert at the Forum in the band's hometown of Los Angeles last Wednesday night (November 29). The set featured relatively rare performances of two tracks from the 2008 "Chinese Democracy" album, "Catcher In The Rye" and "Sorry", in addition to tributes to Glen Campbell, Malcolm Young and Chris Cornell in the form of "Wichita Lineman", "Whole Lotta Rosie" and "Black Hole Sun".

Lead singer Axl Rose said near the end of the evening: "We want to take a moment to just thank our crew. We want to thank all the fans everywhere. Thank you for coming out tonight, and all around the world. I want to thank our fucking amazing crew and all of our business team and our sound man. And the band! For putting up with my shit."

Lead guitarist Slash and bassist Duff McKagan — the other two original members of the group who reunited with Rose for the tour — later tweeted their own thanks.

GUNS N' ROSES will return next June for a seven-week European jaunt, but the band's plans until then, and beyond that, remain unknown for now. The three original members have not given a single interview together.

The reunited trio, along with four backing musicians from latter lineups, have been on the road almost continuously since the tour was launched with a surprise show at the Troubadour nightclub in Los Angeles on April 1, 2016.