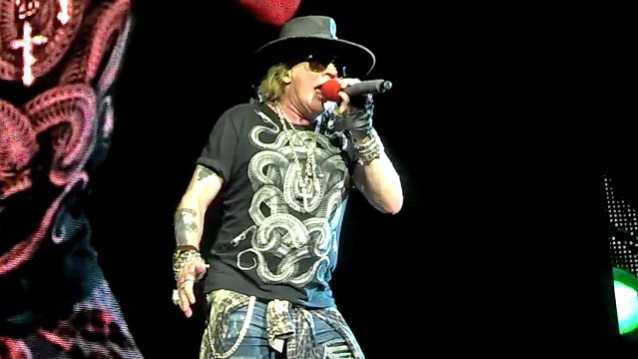 According to The Pulse Of Radio, a GUNS N' ROSES fan named Caroline Campos is claiming that a poster she brought to the band's concert in Nashville on July 9, which read "Where's Izzy?" — asking why original guitarist Izzy Stradlin was not involved in the current tour — was taken from her and ripped to shreds at the request of the band itself.

Campos wrote: "When the original drummer ‪#‎stevenadler‬ came out to play his set, I held up my sign with cheers from most of the people in my section. Axl looked at my sign and started laughing and said 'That's a good question!' He seemed to appreciate the sign." But Campos then said that 15 minutes later, her section got "swarmed" by security and stage crew members asking "Who has the 'Where's Izzy' sign?"

She continued, "Eventually they… saw the sign tucked under my chair. A guy in jeans and a black shirt tapped my shoulder and said 'Is that your sign? You need to give it to me.' I said 'Why? Who are you?' He showed a badge and said 'I'm with the band and they've asked for the sign to be removed.' I said, 'We aren't allowed to have signs?? But I read that..' and he cut me off and said 'You can't have THAT sign. Give it to me.' I gave it to him and he walked away folding and ripping it up."

Campos later told TeamRock: "I do want to try to convey that the sign wasn't meant to be rude or malicious to the band, especially Richard Fortus.

"Asking 'Where's Izzy' is not meant to insult Fortus any more than cheering for drummer Steven Adler would convey anything negative about Frank Ferrer. I made the sign as a tribute to the 'Don't Cry' video, where the 'Where's Izzy' sign is featured for a split second. "It's my favourite GN'R video and I tried to recreate the sign exactly. I'm not sure how anyone could take it to mean anything negative about the band.

"My husband and I paid a lot of money and drove a long way to see the band. I'm just so disappointed it happened. But I thought they all put on a great show, including Fortus."

While former drummer Steven Adler has played a couple of songs each at two recent GUNS shows, Izzy Stradlin remains the last "classic"-era member of the band to keep his distance from the current reunion featuring core members Axl Rose, Slash and Duff McKagan.

There were unconfirmed reports that Stradlin was approached about the reunion, but did not wish to tour and/or was not happy with the money he was offered.

GUNS N' ROSES next plays on Thursday (July 14) in Philadelphia.