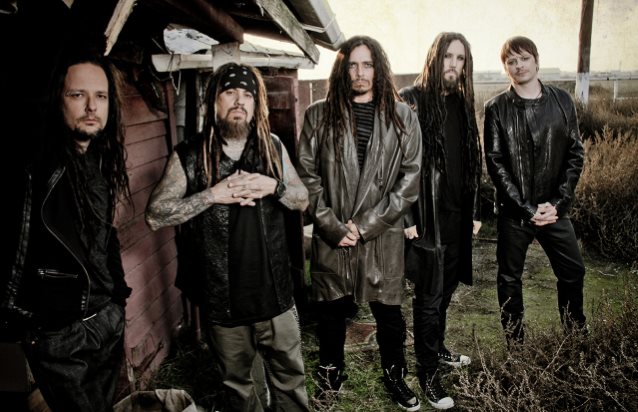 KORN guitarist James 'Munky' Shaffer tells U.K.'s Metal Hammer magazine: "We have Corey singing on one track and it's going to be a fan favorite because he really lets loose."

The as-yet-untitled follow-up to 2013's "The Paradigm Shift" is tentatively due later this year and marks the second KORN album since the return of guitarist Brian "Head" Welch.

"On a heaviness scale of one to ten, with ten being the 1994 self-titled, this album is a definite nine," Munky said.

"When Head came back to us on the last record, it was our way of getting the wheels greased. Now everything is well-oiled and the machine works really well.

"When Head and I start writing riffs together, we have this endless stream of creativity — we're like KORN's yin and yang."

Welch recently told HardDrive Radio about KORN's upcoming album: "I would definitely describe the new KORN music as intense. Every song, I think, is a live song. And so it's gonna be hard to choose which ones we play live, because that's how the whole record's written. And Jonathan [Davis, KORN singer] just… He always digs deep and shares painful stuff, but I feel like he grabbed his soul and ripped it open for this record again, like he used to do, and people are gonna feel that."

KORN will hit the road this fall for the "Nocturnal Underground Tour" where they will share co-headlining duties with BREAKING BENJAMIN and will be joined by special guests MOTIONLESS IN WHITE and SILVER SNAKES.

The "Nocturnal Underground" arena tour will kick off on September 24 at Scheels Arena in Fargo, North Dakota, taking KORN deep into the heart of America through late October. On this trek, the band will pass through such markets as Omaha, Cedar Rapids, Charlotte, Biloxi, Tampa, Jacksonville, Tulsa and beyond. In between, KORN will appear at the Louder Than Life festival in Louisville, Kentucky on October 2.