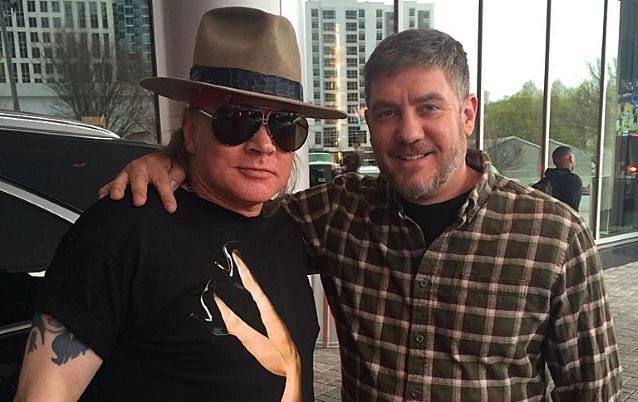 The fan who snapped a photo with GUNS N' ROSES singer Axl Rose last weekend and posted it on Instagram spoke about the experience with the "Bailey And Southside" show on the Rock 100.5 radio station. The fan, named Mark Guglielmo, said he ran into Axl in the valet parking area of the Loews hotel in Atlanta, Georgia. "I was waiting for my friends, and I saw him get out of the car," he explained. "And [I saw] the aviator shades and the bandana, so I was, like, 'That kind of looks like Axl from a profile.' And then he turned, and I saw the forearm tattoo, and I'm, like, 'Holy shit! That's Axl Rose.'"

Guglielmo added that he approached Axl, wanting to make sure it was the reclusive GUNS N' ROSES frontman. "First I said, 'Oh my God! Axl?'" he recalled. "And he just turned toward me and he put his hand out. 'Yeah, man.' And I was, like, 'This is incredible to meet you.' 'Cause I'm in my young forties, and they were the concert I'd ever seen. I mean, I rode a ten-speed bike to go buy 'Appetite For Destruction' when I was, like, fourteen years old. [I told him all that] and he's, like, 'That's great, man. That's so cool to hear.' And then I turned away. And I was, like, 'Wait a second!' 'Cause I was a little starstruck. I realized I had my phone in my hand. And I'm, like, 'Axl, I don't mean to bug you, but can I get a picture?' And then his, I guess, friend took the picture, and he took a good one, and I put in on Instagram, and here we are."

Mark added that Rose told him that the reunited GUNS was planning to do a "whole tour" following the six shows the band has scheduled for next month. "All I did was say, 'Hey, good luck with the tour,'" he said. "And I corrected myself. 'I mean, the few shows.' 'Cause all I knew about was Vegas and Coachella coming up. And that's when he turned back to me, and he said, 'No, man. We're gonna do a whole tour.' He offered that to me."

Guglielmo wrote in the comment thread accompanying the photo, "I don't want to speculate or spread rumors, but it really looked like he's been working out a lot. His arms looked muscular."

Rose has been photographed before in less-than-flattering shape, so this could be an indication that he is getting more fit for GN'R's imminent comeback shows.

GUNS N' ROSES has six concerts scheduled so far, all in April: two at the Coachella Music And Arts Festival, two in Las Vegas and two in Mexico City.

The exact band lineup has yet to be confirmed beyond original members Rose, guitarist Slash and bassist Duff McKagan, although it is almost certain that keyboardist Dizzy Reed, guitarist Richard Fortus and drummer Frank Ferrer are on board as well.

Original members Izzy Stradlin and Steven Adler don't appear to be involved in the gigs, but Adler's solo band abruptly canceled a show at the Whiskey A Go Go in Los Angeles on April 1, with the venue tweeting, "Stay tuned for a big announcement! #GunsNRoses." There is now speculation about a guest appearance by Adler with GUNS.