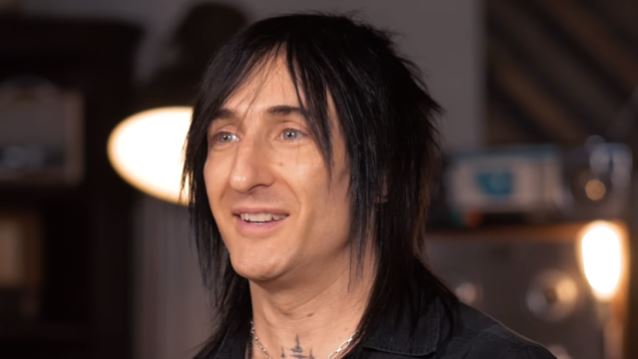 According to the St. Louis Post-Dispatch, GUNS N' ROSES guitarist Richard Fortus married a lawyer named Stephanie Howlett on December 10. The wedding took place at the Basso restaurant in St. Louis, Missouri in front of 25 of the couple's closest friends.

The report does not mention whether any of Fortus's GUNS N' ROSES bandmates attended the wedding, which was paid for by Howlett's boss as a gift to his friend and co-worker.

Fortus said in a recent interview with KSHE that money was not the motivating factor in either GUNS N' ROSES singer Axl Rose reuniting with guitarist Slash and bassist Duff McKagan or Rose now hitting the stage on time. Fortus explained: "Axl has been going on on time for years before [the reunion]. It's been great. Is [money] the motivating factor for him? Absolutely not. I've never seen that guy motivated by money, as long as I've known him. Otherwise, this reunion would have happened a long time ago."

Fortus added: "I think Slash had been trying to get a hold of [Axl] for a while. And they sat down, and Axl was, like, 'Okay, let's just talk it through.' And they sat down privately, went through their laundry list of issues, and were able to put it behind them, and here we are. And it's been really great. It's been incredible, actually."

Fortus also said that he, Axl, Slash and Duff "communicate all the time" when they're not onstage, adding, "We hang out, we all travel together on the same plane."

On whether the current lineup of the band might record new music, Fortus said: "We are messing with ideas every day. I mean, every day we do at least an hour soundcheck, and we'll play through different ideas, like new ideas, put stuff down on tape. It's really organic… Same in rehearsals — we were always putting down different ideas and gettin stuff together and getting ready for that, yeah."

GUNS N' ROSES will come back to North America next summer for at least another 15 stadium dates, as the band continues its wildly successful "Not In This Lifetime" reunion tour.

Fortus joined GUNS N' ROSES in 2001 and became the band's longest-serving post-Slash guitarist. The St. Louis native got his big break when his band PALE DIVINE opened for THE PSYCHEDELIC FURS. This led to Fortus forming the band LOVE SPIT LOVE with PSYCHEDELIC FURS frontman Richard Butler and future GN'R drummer Frank Ferrer. In 2000, Fortus and Ferrer became touring members of the reformed PSYCHEDELIC FURS before Fortus hooked up with GUNS N' ROSES. Ferrer himself joined GN'R in 2006.