Chris Pitman, the Los Angeles-based multi-instrumentalist and songwriter who has been a member of GUNS N' ROSES since 1998 (as the keyboardist, along with Dizzy Reed),was interviewed yesterday (Thursday, October 23) by "Noise Up Thursdays", which is broadcast each and every Thursday on Leith FM 98.8 in Edinburgh, Scotland, United Kingdom. Listen to the chat below.

Best Buy and Geffen Records have finally made an official announcement confirming that GUNS N' ROSES' long-awaited new album, "Chinese Democracy", will be released exclusively through Best Buy on November 23. The 14-song set will be available on CD, vinyl, and as a download. While singer Axl Rose has remained silent, co-managers Irving Azoff and Andy Gould said in a statement, "The release of 'Chinese Democracy' marks a historic moment in rock n'roll. We're launching with a monumental campaign...that matches the groundbreaking sound of the album itself. GUNS N' ROSES fans have every reason to celebrate, for this is only the beginning."

Best Buy Senior Entertainment Officer Gary Arnold added, "'Chinese Democracy' is one of the most highly anticipated albums in music history, and Best Buy is thrilled to deliver this explosive and previously elusive release to GUNS N' ROSES fans... Axl Rose is one of the most dynamic and gifted writers and performers in modern music. Best Buy is excited to work with Axl to make the release of 'Chinese Democracy' THE musical event of 2008!"

Pre-orders for the album began at BestBuy.com on Wednesday (October 22),the same day that the title track arrived at radio stations nationwide.

One new song, "Shackler's Revenge", debuted on September 14 through the Rock Band 2 video game, while another, called "If The World", can be heard in the new film "Body of Lies".

Since that time, every original member of GUNS N' ROSES has left the band except for Axl Rose, who spent 13 years and reportedly tens of millions of dollars with a revolving cast of musicians and producers to finish the new CD. 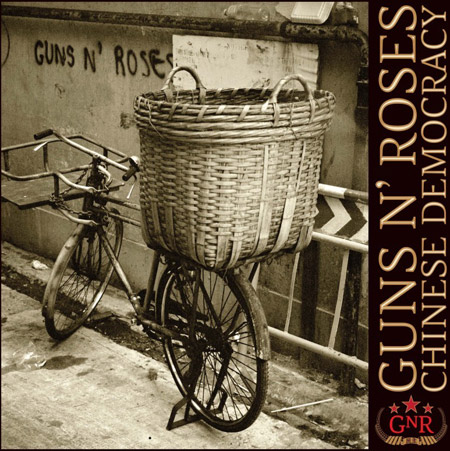