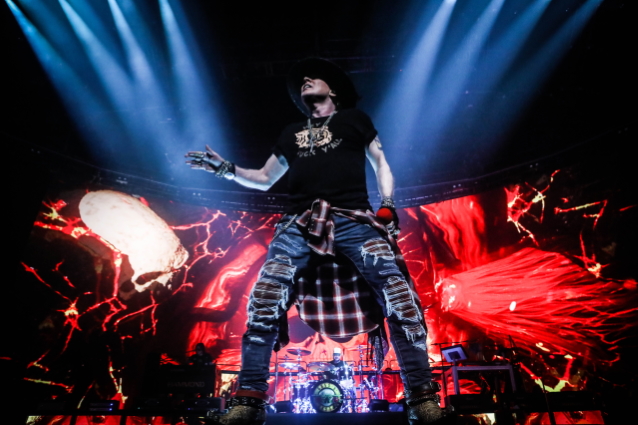 GUNS N' ROSES has officially canceled its previously announced fall 2020 tour of South and Central America due to the coronavirus pandemic which is sweeping the globe. The trek was scheduled to kick off on November 8 in the Dominican Republic and conclude on December 6 in Bogota, Colombia.

The iconic rockers announced the cancelation in a social media post on Friday (September 4). They wrote: "To all our friends and Gunners in South America: the GNR South American 2020 tour dates have been cancelled by the promoters of the shows due to the COVID-19 health mandates and restrictions established by all the various local and national authorities. However, the safety and well-being of our fans, ham and community remains our highest priority.

"These tour dates will not be rescheduled at this time due to the current impact of COVID-19 around the world.

"We appreciate your patience and understanding during these unprecedented times. We are working on putting together a new Latin/South America tour. Please hang in there for further details once dates are locked in.

"Local promoters will issue detailed plans for all ticket refunds."

GUNS N' ROSES' "Not In This Lifetime" tour, which began four years ago, recently became the No. 3 highest-grossing tour in the history of Billboard Boxscore.

Tour update for all our friends in South America 🌹 pic.twitter.com/dl3DpAbnpj