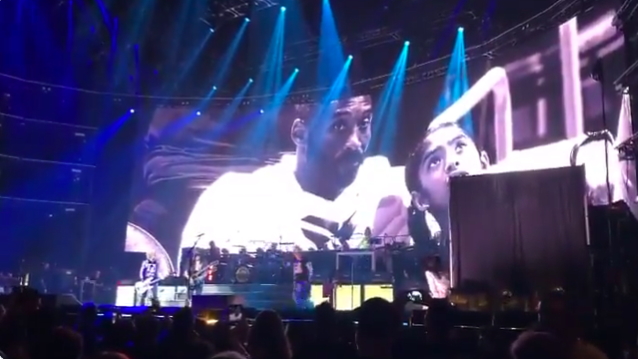 GUNS N' ROSES paid tribute to basketball star Kobe Bryant during their concert last night (Friday, January 31) at the second Bud Light Super Bowl Music Fest at AmericanAirlines Arena in Miami, Florida. The NBA legend and his daughter were among nine people killed in a helicopter crash in Calabasas, California, on January 26. Bryant was 41.

Prior to launching into GUNS' cover version of the Bob Dylan classic "Knockin' On Heaven's Door", singer Axl Rose told the crowd: "The other night, coming home from rehearsal, I was, like, 'Is it just me or is that really weird?' It was this fog bank, like a thunder cloud over the trees. It was really white with a slight pink and this light coming off the ground. It was really weird. It looks formidable. By morning, apparently, it was much worse. That's what [Kobe Bryant's] helicopter flew through. It was pretty scary. I want to dedicate this to Kobe and his daughter and everyone on the flight and everyone in the families and everyone impacted by this terrible event."

While GUNS performed the track, the gigantic video screen behind the stage cycled through a slideshow of images of Kobe and his family.

Bryant and his 13-year-old daughter Gianna Bryant were on their way to a travel basketball game with when the helicopter crashed. According to the Los Angeles County Sheriff's Department, there were no survivors of the crash. The incident occurred before 10 a.m., and the fire made it difficult for firefighters and emergency personnel to get to the aircraft, according to the Los Angeles Times.