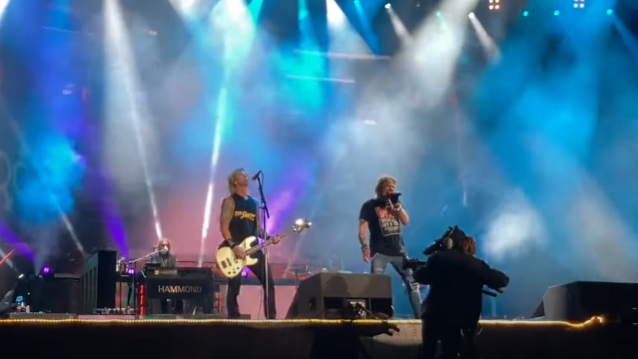 GUNS N' ROSES played a cover version of the AC/DC classic "Walk All Over You" during its headlining concert Saturday night (June 4) at Passeio Marítimo De Algés in Oeiras, Lisbon, Portugal. Fan-filmed video of the performance can be seen below.

Six years ago, GUNS N' ROSES' Axl Rose did a string of European and North American concerts with AC/DC as a "guest vocalist," mostly to fan and critical acclaim.

In March 2016, AC/DC's singer of 35 years, Brian Johnson, had to leave the band's North American tour after doctors told him he might lose his hearing, while 40-year bassist Cliff Williams announced his retirement at the rescheduled trek's conclusion.

The lineup that completed the tour consisted of Rose, Williams, Angus Young, Chris Slade on drums and Angus's nephew Stevie Young on guitar.

AC/DC's North American tour with Rose ended in Philadelphia in September 2016, and despite initial fan trepidation, Axl got generally good reviews for his performances. Angus said at the time: "I mean, under the situation that we had, it was very good that he volunteered and said, 'Hey, if I can help, let me try.' So he's been very good. And he had to learn a lot of songs very quickly, and he's done a great job."

Duff spoke about Axl's collaboration with AC/DC during a 2019 appearance on "The Church Of What's Happening Now" podcast. He said: "The way [Axl] did that was amazing. He was, like, 'If you guys don't mind, I'm gonna go try out. They need a hand here.' [Late AC/DC frontman] Bon Scott's his all-time [hero]. [We said], 'Dude, you know you don't really have to try out for AC/DC.' But he was really nervous. 'I'm gonna go try out. It fits in with our touring perfect.' And [GUNS N' ROSES guitarist] Slash and I were, like, 'You've got the gig.' But he went to Atlanta and tried out, quote-unquote, and got the gig. I saw him twice on that tour. I flew to London to see him, and I flew to Cleveland to see that. It was great."

This past January, Slash told Classic Rock magazine about Axl's pairing with AC/DC: "I came out to a gig in London, and it was phenomenal. I was blown away, especially when he sang the Bon Scott stuff. That was a very proud moment, actually."

Asked by Classic Rock writer Paul Elliott if it felt weird seeing Rose fronting another band so soon after GN'R launched its reunion tour, the guitarist said: "Not at all. It was AC/DC, man.

"The fact that he got asked to do that was very cool," Slash continued. "And he worked his ass off doing it, too. He really adhered to the whole AC/DC regimen and pulled it off.

"In the moment, when it first came up, it was a little jarring, I have to say," the guitarist admitted. "I was super-proud that he was doing it, but how that was gonna happen and go right into the GUNS thing, I really didn't know. But anyway, it worked out. So it wasn't like a big deal.

"In all these years that we've been apart, he's become super-fucking professional. And he's never missed a beat during this whole time. So it's been great. There has been a sort of synergy that's been happening this last six years that we never had in our first incarnation."

Back in February 2017, GUNS N' ROSES was joined by Angus on stage for a pair of AC/DC songs — "Whole Lotta Rosie" and "Riff Raff" — toward the end of GN'R's main set at two concerts at Sydney's ANZ Stadium.

AC/DC reunited with Johnson and Williams in 2018 to record its long-awaited comeback album, "Power Up", which was released in November 2020. 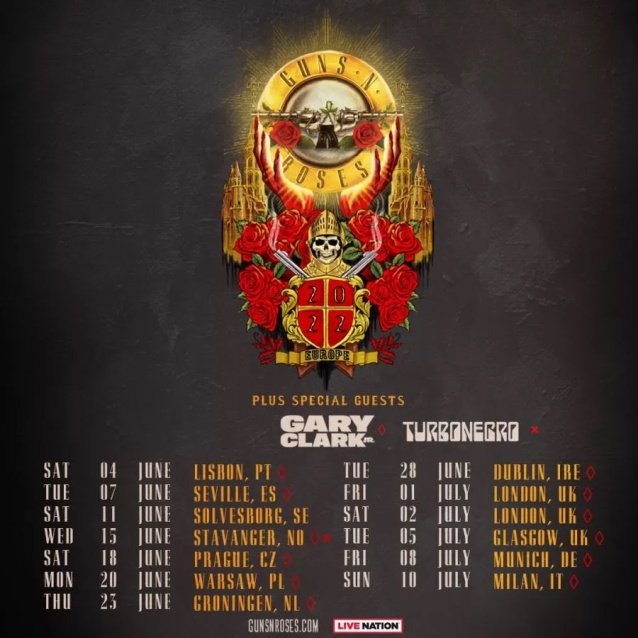