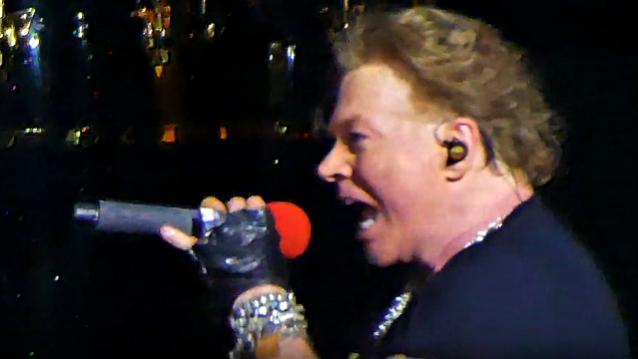 GUNS N' ROSES performed at the iconic Hollywood Palladium on Saturday, September 21 as part of the Citi Sound Vault series.

The concert marked the band's first live appearance of 2019. It was also GUNS N' ROSES' debut performance at the 5,000-capacity venue in nearly a decade.

GUNS N' ROSES will kick off a five-week run of dates on September 25 in Charlotte, North Carolina. This includes two nights at Las Vegas's legendary Colosseum at Caesars Palace, their most intimate venue since the 2017 performance at The Apollo Theater. GN'R will also make highly anticipated stops at major festivals, along with two goliath Mexico dates at stadiums in Guadalajara and Tijuana. Tickets are on sale now at LiveNation.com.

"Not In This Lifetime" is now believed to be the second-highest-grossing tour of all time, having generated more than $500 million since it began three years ago.

Since the end of the tour last year, guitarist Slash and bassist Duff McKagan have both returned to solo endeavors.