GUNS N' ROSES: South American Leg Of 'Not In This Lifetime' Tour Grosses More Than $56 Million

According to data reported to Billboard Boxscore, thirteen concerts on the South American leg of GUNS N' ROSES' "Not In This Lifetime" tour yielded a total gross of $56.545 million and more than 565,000 tickets sold.

105,000 tickets were sold to the band's November 4 and November 5 shows in Buenos Aires, Argentina, with another 93,600 fans attending the group's November 11 and November 12 gigs in São Paulo, Brazil. The October 29 concert at Santiago, Chile's Estadio Nacional drew 62,375 people.

According to Billboard, the North American leg of the "Not In This Lifetime" summer stadium tour grossed a whopping $116.8 million with over one million tickets sold, a staggering amount for a rock band in 2016.

As previously reported, GUNS N' ROSES is coming back to North America this summer for at least another 15 stadium dates, as the band continues its reunion tour. The new North American run kicks off on July 27 in St. Louis, ending on September 8 in San Antonio. 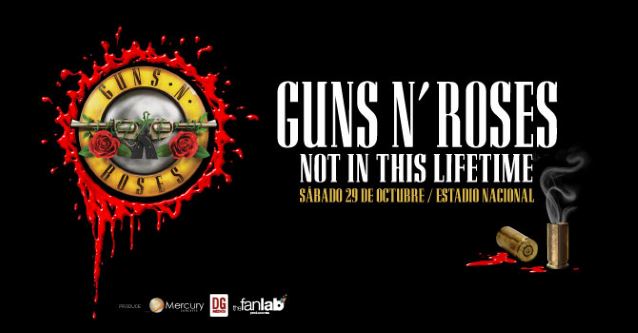