According to The Blast, GUNS N' ROSES has filed a lawsuit against a company it claims has been selling a knockoff beer named after the band.

Canarchy Craft Brewery Collective has allegedly been seeling a beer called Guns 'N' Rosé through its portfolio of craft breweries, which includes Oskar Blues Brewery. In addition, the band claims the company has been selling hats, t-shirts, pint glasses, stickers, buttons, and bandannas with the Guns 'N' Rosé name on them.

Guns 'N' Rosé is described as "a 6 percent ABV ale brewed with hibiscus and prickly pear."

Axl Rose, Slash and Duff McKagan claim Canarchy tried to trademark the name but after the band objected, the Fireman Capital-backed brewery consortium agreed to abandon the application.

GUNS N' ROSES claims Canarchy agreed to stop all the goods completely, but not until March 2020.

The band is suing for trademark infringement and is seeking unspecified damages.

Guns-n-Rose bands together sticky prickly pear and floral hibiscus with a subtle hop profile in this refreshing, crisp AF rose’ ale. Available on draft, in select markets now, and we’ll be droppin cans in February. Check below to find it near you.https://t.co/8N7ATICd9Kpic.twitter.com/QJWmBbiv53 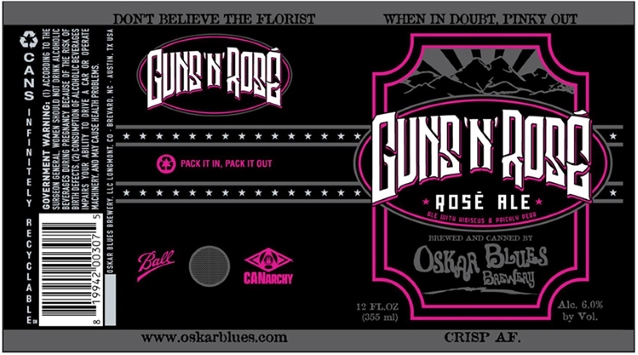