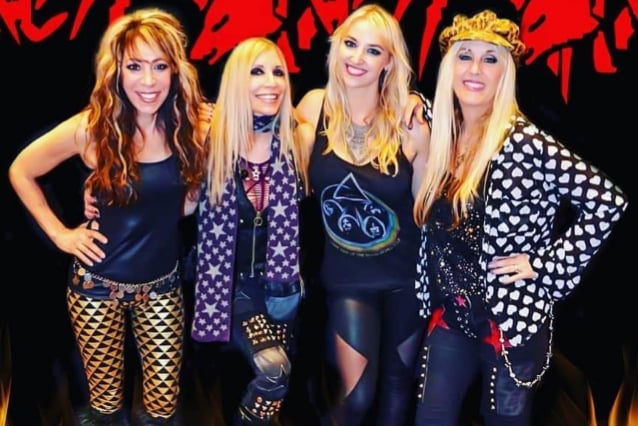 VIXEN is working on material for a new full-length album, tentatively due next year.

The bandmembers spoke about their recording plans last weekend at the M3 Rock Festival in Columbia, Maryland.

"We have music in the works," drummer Roxy Petrucci told Max 1On1 - Conversations With Musicians (see video below). "We're all coming up with ideas and sending them around. Yeah, we plan to do a record — a badass record."

Added singer Lorraine Lewis: "We all collab. Britt [guitarist Brittany Denaro] and I live in L.A., so we've started writing sessions together. And then we've all been writing together. They had some stuff going [before I joined], so we're just putting the finishing touches on some things and hoping to release a record in 2020."

This past January, VIXEN recruited Lewis as its new lead singer following the departure of Janet Gardner.

Lewis, who also fronts FEMME FATALE, had already performed with VIXEN, having played with the group in March 2018 in Durant, Oklahoma while Gardner was recovering from surgery.

Prior to Lewis's addition to VIXEN, Petrucci, Denaro and Share Ross (bass) vowed to "expand upon the VIXEN legacy while remaining true to our musical roots."

Gardner, who released her debut self-titled solo album in 2017, broke the news of her exit from the group on January 16.