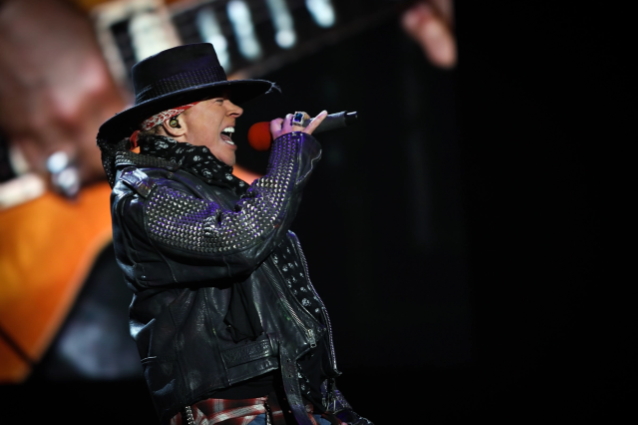 GUNS N' ROSES' "Sweet Child O' Mine" has topped Billboard's Hot Hard Rock Songs chart, just days after it was included in the new trailer for the upcoming movie "Thor: Love And Thunder". The track also re-entered the Hot Rock & Alternative Songs chart at No. 9.

"Thor: Love And Thunder" finds Thor (Chris Hemsworth) on a journey unlike anything he's ever faced — a quest for inner peace. But his retirement is interrupted by a galactic killer known as Gorr The God Butcher (Christian Bale),who seeks the extinction of the gods. To combat the threat, Thor enlists the help of King Valkyrie (Tessa Thompson),Korg (Taika Waititi) and ex-girlfriend Jane Foster (Natalie Portman),who — to Thor's surprise — inexplicably wields his magical hammer, Mjolnir, as the Mighty Thor. Together, they embark upon a harrowing cosmic adventure to uncover the mystery of the God Butcher's vengeance and stop him before it's too late.

In a 2014 interview, GUNS N' ROSES guitarist Slash said that he wasn't fond of "Sweet Child O' Mine" when it was first written. He explained: "GUNS N' ROSES was always a real hardcore, sort of, AC/DC kind of hard rock band with a lot of attitude. If we did any kind of ballads, it was bluesy. This was an uptempo ballad. That's one of the gayest things you can write. But at the same time, it's a great song — I'm not knocking it — but at the time, it just did not fit in with the rest of our, sot of, schtick. And, of course, it would be the biggest hit we ever had."

Slash told Metro nearly a decade ago that "Sweet Child O' Mine" was the most lucrative song he has composed. He said: "It's the most covered [song I have ever written]. There are some really good instrumental versions for the piano or violin, but I've been horrified by some muzak versions. I've been sitting in a doctor's office thinking, 'That sounds familiar,' and then realizing it's someone's interpretation of what I've written. That can be a creepy feeling."