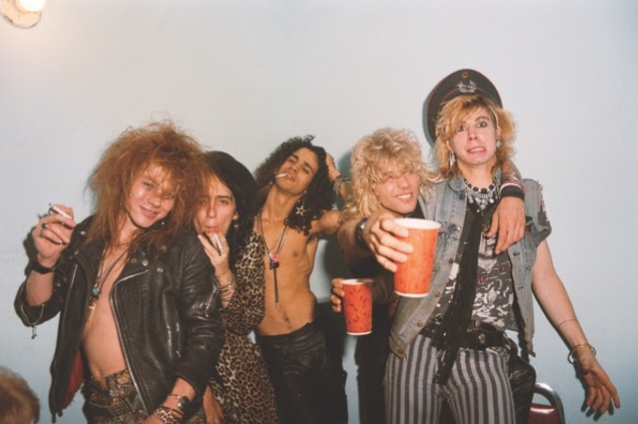 Marc Canter and Jason Porath, the authors of the critically acclaimed book "Reckless Road", have announced the launch of the video podcast "The First 50 Gigs: Guns N' Roses And The Making Of Appetite For Destruction". The introductory episode along with episode one of the first season is available now exclusively on Patreon.

The "Reckless Road: Guns N' Roses And The Making Of Appetite For Destruction" book, which was published in 2008 and won an IPPY for Pop Culture Book Of The Year, was just the tip of the iceberg of an archive created by Canter, photographer, music historian, and owner of the world-famous Canter's Deli. Canter captured the band's formative years and the heyday of the Sunset Strip music scene. Canter, who has a photographic memory, came to realize that his memories, the history of this era in Los Angeles, and the formation of this iconic band, will die with him if he doesn't tell them. "The First 50 Gigs" project has been years in the making.

"Marc's one-of-a-kind archive on the early days of GUNS N' ROSES and the first 50 gigs of the 'Appetite' lineup of GUNS N' ROSES is unprecedented," says Porath. "Marc truly captured lightning in a bottle and the power of those images he and Jack Lue created will now be amplified by first-hand accounts by the people who were there, giving audiences a true play-by-play unfolding of events."

"This video podcast is a multilayer documentary told by the people and band members that were there," says Canter. "Those that were involved in the incestuous revolving doors of the bands that eventually led to the 'Appetite For Destruction' lineup."

Putting fans first, this first season of the show will be available in several tiers on Patreon with the intention of growing the show's community to a level that will enable the production of the next few seasons. All episodes from season one were recorded in English with transcripts available in Spanish and Portuguese. The three subscriptions tiers enable different levels of access from audio-only, to visual and audio, exclusive content which includes additional interviews, bonus video and audio, and merchandise items. All tier levels come standard with private RSS feeds that will allow you to listen to the show on your favorite podcast player (e.g. Apple Podcast, Stitcher, etc.)

The introductory episode dives into Canter's credentials. Canter's family restaurant, Canter's Deli, which he currently owns and operates, is a Los Angeles landmark that has been a featured player in the history of the city for decades. Canter grew up with Slash, and Canter's Deli, along with the adjoining Kibitz Room, and became a second home for the band, as well as a staple post-show, late-night hang for the Sunset Strip crowd. Canter knew from early on that Slash was special and began to document his shows, saving memorabilia, photos and video from all of his performances. Episode one tells the story of Slash's first band, TIDUS SLOAN, through photos, videos, and an interview with TIDUS SLOAN drummer and founding member Adam Greenberg.

"By retelling this story in podcast form, 'The First 50 Gigs' can take listeners deeper into stories, personalities and events and explore every aspect of this origin story that often is left on the cutting-room floor of a book or documentary, '' says Porath. " Anyone around the world can click on a button and transport themselves back in time to the 1980s Sunset Strip and follow the action that led to one of the greatest rock and roll breakthrough stories of the decade."